Wimbledon is set for a wet start to the 2021 tournament with rain forecast for most of the day, potentially wreaking havoc to the schedule. The All England Club opens it’s doors to thousands of fans today with the likes of Novak Djokovic, Andy Murray and Dan Evans in scheduled to play.

But scattered downpours are predicted for much of Monday at Wimbledon, meaning matches on the outside courts could be delayed or postponed.

Two yellow warnings have been issued by the Met Office for the first day of the tournament.

Play is scheduled to start at 11am on the outside courts, but the covers are currently on.

Wimbledon officials could call a delay to the start of play, which would likely mean matches moved around during the day.

Matches on Centre Court and Court 1 will not be affected though as both have retractable roofs which will likely be used.

JUST IN: Johanna Konta ruled out of Wimbledon as team member tests positive 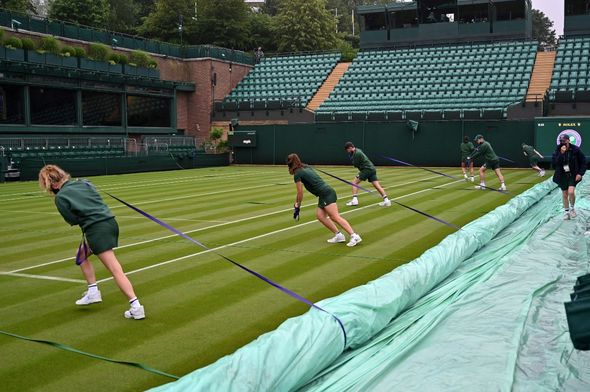 Wimbledon order of play – Day one