The Association of Tennis Professionals thinks that Wimbledon’s decision to ban Russian and Belarusians this year “undermines the principle and integrity of the ATP’s ranking system”, which is why they have removed rankings points from the tournament.

You imagine the Ukrainians cowering in an air raid shelter under a theatre in Donetsk felt a bit undermined when the bombs began to fall, too, not to mention scared witless and utterly helpless. But they had no recourse. Three hundred of them died.

The ATP – jointly with the Women’s Tennis Association (WTA) – says its rules exist to “protect the rights of players as a whole”. Those trapped in a maternity hospital in Mariupol as it was bombed had much more fundamental rights, but no protection. One died with her newborn in her arms.

The ATP are concerned that “unilateral decisions of this nature, if unaddressed, set a damaging precedent”.

The untold thousands who died in the razing of Mariupol also were subject to a unilateral decision, setting a damaging precedent.

So were those who died in kindergartens and orphanages in Kyiv, and shelled while crossing a road in Irpin, and buried under tonnes of rubble in Borodianka, and bombed to death at Kramatorsk train station while waiting to evacuate. So were three unarmed civilians shot dead while feeding a dog in Bucha. They died with their rights comprehensively unaddressed. 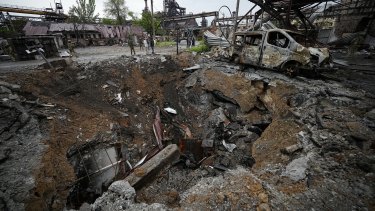 The WTA’s rhetoric echoes the ATP’s. “The stance we are taking is about protecting the equal opportunities that players should have to compete as individuals,” it says. It’s hard not to think that equal opportunity is a bit of a moot point in Kyiv right now, let alone Mariupol.

Please don’t say they’re not connected. Wimbledon took its decision to impose a ban as part of a global effort in all spheres to sanction Russia for its despotic and unconscionable invasion of Ukraine.

The handful of Russian and Belarusian tennis players affected can be thought of as collateral damage. It might irritate them a little now, but soon enough they will be swanning around the world again, relief only ever one good massage away. Both they, and their rankings, will recover.

The tens of thousands of innocent war dead collateral in Ukraine won’t swan anywhere ever again. In their mass graves, they’re beyond recovery. 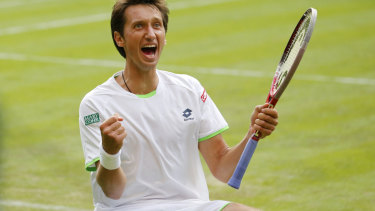 Sergiy Stakhovsky in his finest hour, beating Roger Federer at Wimbledon in 2013.Credit:AP

And please, please, don’t try that most tired and discredited of tropes about how sport and politics shouldn’t mix. They’re joined at the hip, head and heart.

Wimbledon is not merely an annual tennis tournament administered by the all-England club in SW19. It is synonymous with England’s cultural identity and an icon of the centrality of sport in world affairs. It simply cannot choose to belong to that world or keep at a distance as convenient.

Wimbledon recognises this. It imposed its ban under advisement from the UK government. “We remain unwilling to accept success or participation at Wimbledon being used to benefit the propaganda machine of the Russian regime, which, through its closely controlled state media, has an acknowledged history of using sporting success to support a triumphant narrative to the Russian people,” it said.

Please, please, don’t try that most tired and discredited of tropes about how sport and politics shouldn’t mix. They’re joined at the hip, head and heart.

Lamely, the ATP says Wimbledon could have left it up to individual players to compete as neutrals, signing declarations disowning Russia’s war. Correctly, Wimbledon says this would endanger them and their families. Whether they won’t or can’t speak up, Wimbledon is sparing them. 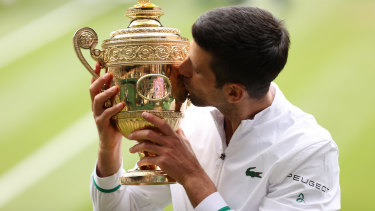 The ATP/WTA decision to withhold ranking points for Wimbledon is as perverse as it is tone-deaf. For one, it is self-sabotage. Never mind that Wimbledon is privately run, which has long bugged the player bodies, it is the prize they all covet. Expect most, if not all, of the big names to play anyway, literally pointlessly.

For another, it means that even if Novak Djokovic defends his title, he will lose the 2000 points that came with it, practically assuring Daniil Medvedev of overtaking him as No.1. Medvedev, in case you have forgotten, is Russian.

By this tit-for-tat, the ATP and WTA are cutting off their noses to spite their faces. Go ahead then. It’s an unnecessary disfiguring, but it will heal. The tens of thousands of dead in Ukraine won’t, nor the ruined lives of millions of their displaced countrymen, nor for many decades their country’s heart.

The ATP says Wimbledon’s stance “again highlights the need for a united governance structure across professional tennis so that decisions of this nature can be made in a joint manner”. No, it highlights a bloody warmonger and his bloody war machine, and his bloody awful war.