Alex de Minaur comes across as a shy kid. He’ll even tell you that himself. But those who know him as well as Lleyton Hewitt will tell you that there’s an internal confidence that he oozes.

Anyone who was in Darling Harbour in Sydney for the Davis Cup dinner ahead of the tie against Slovakia in 2016 will know that.

Alex de Minaur entertains the Slovakian and Australian teams at a Davis Cup dinner back in 2016.Credit:@DavisCup (Twitter)

They got to see a different side to him when he performed that unforgettable dance routine wearing a leotard as part of his Davis Cup initiation as Orange boy.

De Minaur, who takes on Novak Djokovic in the fourth round on Monday night, has drawn plenty of comparisons to Hewitt throughout his career. His grit and tenacity are the same qualities Hewitt built his career on.

“A lot of people have long told me that they see some of my characteristics in the way he goes about his tennis,” Hewitt told the Herald and The Age. 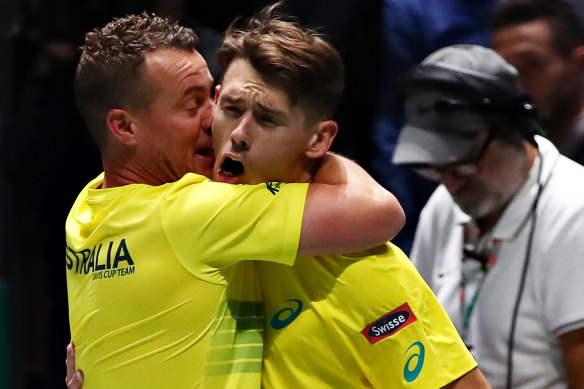 “I can definitely see that. That never-say-die attitude was something I prided myself on. That desire to want to leave it all out on the court and get every last bit out of yourself … he’s in the same mould when it comes to that.”

Given his role as Davis Cup captain, it’s Hewitt’s duty to get to know his players on a much deeper level than he would in his normal role with Tennis Australia.

Hewitt has long held the belief that learning what it is that makes players tick helps him, especially when it comes to Davis Cup, extract the most out of his players.

He admits his views on De Minaur are often like a proud father.

“The kid is a sponge. His willingness to learn is something I admire, and his dedication to Australia is why this country has fallen in love with him,” Hewitt said.

“Every time he steps on to that court, I know that he will go that extra distance for me. It’s not the results that make me proud, it’s knowing that when he plays he’s not just doing it for himself.

“He’s doing it for me, the coaches, his teammates, his country and everyone else behind the scenes. That’s the quality of the person he is.”

Hewitt paid tribute to De Minaur’s mentor and coach, Adolfo Gutierrez, who has been travelling the world with the Australian since he was nine years old.

Hewitt said he always saw a quality player in the boy from Sydney, who has spent large parts of his life residing in Spain.

“I still remember coming out to the back courts at Melbourne Park when Alex was a teenager to watch him play,” he said.

“No-one knew who he was. He was in a wildcard playoff to get into the main draw. They might not have known who he was before the tournament, but his effort in winning that five-set match against Austria’s Gerald Melzer in his first-ever match at the Australian Open put him on the map.

“That was a proud day, and he hasn’t let anyone down since. I always believed he could be a good player, but you never know just how good a kid can be. Myself and Tony Roche have always tried to instil a belief that he can go out there and beat the best. That he belongs out there in their company. I think that’s helped him enormously.”

The odds are stacked against De Minaur for his upcoming fourth round showdown against Djokovic. He’s never reached the quarter-final at his home grand slam. The experts say Djokovic is ripe for the picking, given the hamstring injury that has somewhat hampered his performances this tournament.

But Hewitt said De Minaur runs a huge risk going out there and playing the injury and not the man.

“Alex needs to forget there is even a question mark over Novak’s fitness and play his side of the court,” Hewitt said.

“Physically and mentally, you need to prepare for a long battle. When you play against the likes of Roger Federer, Rafael Nadal, Novak and even Andy Murray at his best, if you prepare for anything less you’re beaten before you walk on to court.”

Hewitt had the privilege of playing most of his matches at the Australian Open on Rod Laver Arena. It’s a moment he wants De Minaur to cherish.

“There are many things I miss about playing,” he said. “One of the things I miss the most is that walk out on to Rod Laver Arena. You never get sick of that walk.

“It’s why you work so hard your whole life, to cherish moments like that walking down that corridor past some of the greatest names to ever play the sport. I’ll tell him to enjoy it, stay positive, and be ready for one bloody hard challenge.”

Related posts:
Previous Post: PETER REID: Everton need warriors to get them out of this mess
Next Post: Everton close in on signing of Arnaut Danjuma from Villarreal