Rafael Nadal’s desire and motivation are the traits that set him apart from other players. Nadal is into the 19th year as a professional player but despite the grind of the tennis tour, his will to win remains undiminished.

Last month, before tennis was suspended until June, Nadal celebrated his 85th career title at the Mexican Open in Acapulco.

Not since 2004 has Nadal finished the year outside the top 10 which is a testament to his consistency and longevity.

And in spite of the many injuries he’s suffered, Nadal has always returned to action as hungry as ever to win.

In a discussion about over the greatest player of all time on Tennis Channel, former Wimbledon champion Lindsay Davenport was effusive in her praise for Nadal’s motivation levels.

“I just marvel at how he still has that motivation. Getting into his mid-thirties, he’s just as motivated now as he was in his teenage years.

“Normally that is what takes players out of the game. They can’t call on that reserve energy to get through tough practises day in and day out.

“They lose their zest for going to tournaments and going through the grind of the tour. 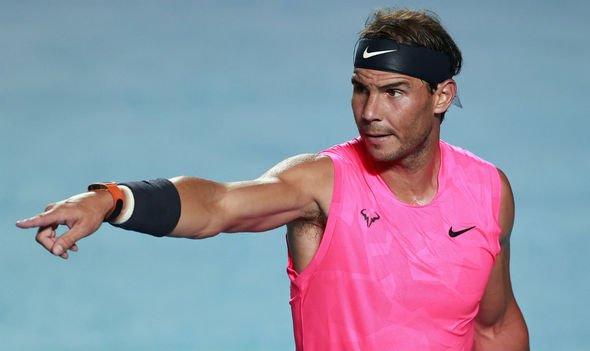 “But you see Rafa and you hear him [say] ‘I love this. I want to be here more than anywhere else in the world’.

“When you watch him play, it is that motivation, that inner desire that seems deeper in him than most other players we have ever seen.

“We are so lucky that he chose our sport and he’s still in our game.”

Meanwhile, a former rival of Nadal, Juan Carlos Ferrero, has backed young star Carlos Alcaraz to live up to the hype and pressure of being dubbed Spain’s new tennis star.

He told the ATP: “Usually he hears people who say he is going to be the next Rafael Nadal… of course, it’s going to be difficult for him to [keep things] normal and stay calm and not tell me, ‘Why are they saying this to me?’

“But he’s a little bit used to it, because most of the people here in Spain, they come to him many times and tell him he’s going to be the next Rafa Nadal.

“Finally, I think he’s used to it and he put it away and he goes his own way to always work very hard and to try to make his own career.

“Of course, the comparison is going to be there because for people here in Spain, it’s been a long time that we haven’t had anyone at the age of 16 or 17 [playing] this kind of level.

“But the team that is around him, we have to try to [keep a circle] around him to help him try to put this pressure away, to make him calm, to keep things normal, so he can go his own way.”

Related posts:
Previous Post: Champions League decision to be made on Wednesday amid coronavirus pandemic
Next Post: Becky Lynch reveals key issue she had while taping WrestleMania bout with Shayna Baszler