Roger Federer says he is ‘devastated’ at the news Wimbledon has been forced to cancel due to the coronavirus pandemic. The Swiss was aiming to play at SW19 this year as part of his comeback from knee surgery.

But those plans have been scuppered by the outbreak of the deadly virus which has had a major impact across the world.

Due to public health concerns linked to the epidemic, the All England Club was left with little choice but to cancel and the 134th Championships will instead be staged from 28 June to 11 July 2021.

With eight titles, Federer is a beloved figure at Wimbledon and he was among the first to react with a one-word tweet saying: “Devastated” and a GIF which said, “There is no GIF for these things that I am feeling”.

Federer was not the only tennis star to respond to the news regarding Wimbledon.

Two-time Wimbledon doubles champion Jamie Murray told the BBC, that there were too many unknowns for Wimbledon to go ahead.

“It was the obvious decision in the end, which is a shame,” he said.

“Obviously Wimbledon means a lot to a lot of people but nothing compares to what’s going on around the world just now. 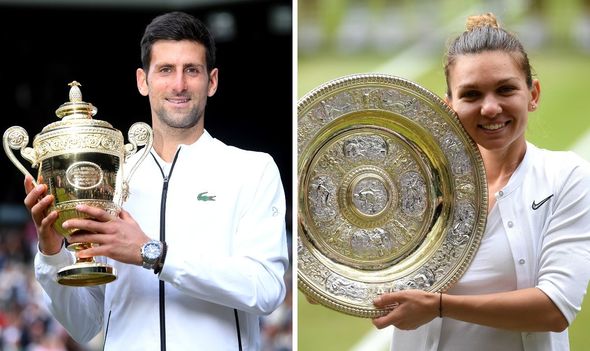 “Certainly in Europe, no-one is able to get out on court and prepare and Wimbledon is the focal point of the tennis calendar and they want to show tennis in its best light.

“I assume that if the Tour did start up, that would be the next tournament that players would compete in and obviously preparation would be all over the place.

“And also they don’t know whose borders and going to be open to who, some players might not be allowed to travel out of their country or travel to the UK, there are just way too many unknowns.”

Following the announcement from Wimbledon, the ATP and WTA jointly confirmed the extension of the suspension of the both tours until July 13.

“Regrettably, the ongoing COVID-19 global pandemic leaves us with no choice but to suspend the Tour further; a decision we’ve made in close cooperation with our members and the other governing bodies of tennis,” said Andrea Gaudenzi, ATP Chairman.

“Health and safety remain the top priority as we navigate the challenges ahead in these unprecedented times, and we will do everything we can for the Tour to resume at the earliest opportunity once it is safe to do so.”

“This was a decision that the WTA and its members did not take lightly, however, we remain vigilant in protecting the health and safety of our players, staff and fans,” added Steve Simon, WTA Chairman and CEO.

“While we share in the disappointment of the season’s further postponement, our priority remains to support each other during this unprecedented time and work together as a sport in preparation for our return to play.”