Roger Federer is open to returning to Wimbledon as a BBC commentator after promising he will not become a “ghost” in his retirement. The Swiss superstar will play his final ATP Tour match in the doubles at the Laver Cup in London on Friday night – probably with Rafa Nadal.

But Federer, 41, said he could still be seen – and heard – in the future in tennis

“Funnily enough, I always thought I’ll never go on the journalist side or that commentary would never be a thing for me,” he said. “But the subject of commenting suddenly came to mind six months ago. Who knows? Maybe specifically commenting on some games in Wimbledon, for example.

“So we’ll see what happens. But I have no plans so far. Jumping back in and out every once in a while might be something tennis could use. This allows you to keep in touch with the tour and the players. And sometimes when you’re a past player, you need a purpose to come back to a tournament as well.

“It’s not so much about Wimbledon. For me it’s more about having past players or champions for that matter commentate is important. That’s why I’ve always loved having Johnny Mac around, (Mats) Wilander, you name it, Chrissie Evert.

“It’s super important because they give you the insight, they tell you how it used to be or how they felt or, you know, they can relate very much so.

“And I think sometimes you watch matches because of the commentary and less about the match itself. So I think it has a really important part to the game. And if I can add something, maybe that would be nice, but I would also have to really think about it. But I just think it’s important that we, the great players, still are around sometimes.”

The 20-time Grand Slam, who has won Wimbledon eight times, added: “I just wanted to let the fans know I won’t be a ghost.

“It’s funny, I talked about Bjorn Borg just before. I don’t think he returned to Wimbledon for 25 years. That, in a way, hurts every tennis fan. Totally acceptable, his life, his reasons. 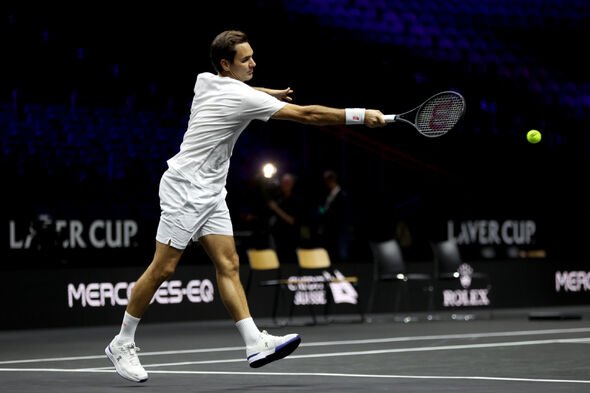 “But I don’t think I’ll be that guy and I feel tennis has given me too much. I have been around the game for too long. Have fallen in love with too many things.

“I love seeing people again, and that’s kind of what I wanted to let the fans know that you’ll see me again. Not just never again.

“Now what it could be, in what capacity, I don’t know. So I still have to think about it a little bit but give myself time.”