Rafael Nadal has denied any problem with Fabio Fognini ahead of their Australian Open meeting. The duo are set to reignite an old rivalry, following their war of words in the 2015 Hamburg Open final.

They will now clash in the fourth round next week Down Under after the Spaniard beat Cameron Norrie in straight sets.

Nadal did show signs of slight discomfort from a back problem though.

Novak Djokovic’s tournament hopes are now resting on whether he can recover from a stomach muscle injury.

While Nadal may be feeling optimistic about his chances, he will now turn attention his next match against the Italian.

Nadal was rather prickly when asked to describe Fognini as a player and a personality, claiming their on-court argument as now blown over.

He said: “Well, personality, I don’t have to – I don’t need to have an opinion, no? I have a very good relationship for him.

“Of course we had our story on court a couple of years ago, but no problem at all after that, no?

“I always try to have a good relationship with everybody in the locker room, no? The life is much happier like this, no?

“And with Fabio, I never had a big problem. Just on court that time. I was speaking with him now in the locker.

“So like a player, he’s one of the most talented players on tour with a lot of amazing things.

“When he’s playing well, he’s one of the most dangerous opponents on tour without a doubt, no? 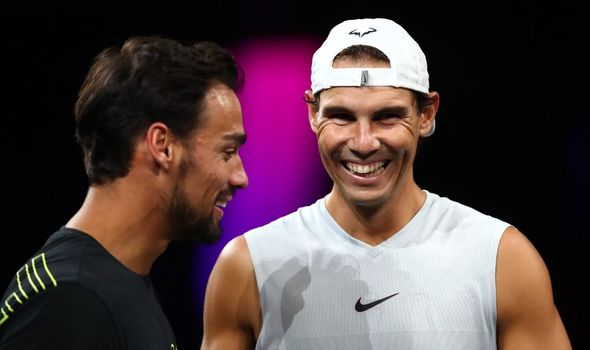 “Today he had an amazing victory against a great opponent, so will be a very tough match. But I hope to be ready for it.”

Speaking last year, Fognini admitted that both Djokovic and Nadal are virtually untouchable when at the top of their game.

But he feels Nadal is beatable: “When Roger and Novak are at their top, it is very difficult,” Fognini told NRC. They play so fast, give you no space.

“With Rafa it is different, his game is more physical. He destroys you in the rally and mentally. But you can play against him, you can run.”