Rafael Nadal expressed his relief after overcoming ‘very humid’ conditions to reach the Mexican Open final. Nadal is no stranger to heavily perspiring during his matches and it was the case again in the late evening semi-final against Grigor Dimitrov in Acapulco.

The world No 2 dropped his serve in the third game of the match before hitting back and going on a run of four games in a row to establish control.

And a vintage forehand winner down the line from Nadal earned him the set 6-3.

Dimitrov bounced back from the disappointment of the opening set to break Nadal and lead 2-0 in the second set.

But from that point, Nadal won six games in a row to blast past the Bulgarian and set up a final against American Taylor Fritz.

And after the match, the 33-year-old was elated to have got the win despite the tricky conditions.

“The conditions are crazy, very very humid. Tonight is has been very hard conditions,” Nadal said.

“I’m very happy. A great victory against one of the best players in the world and a good friend.

“I think it was a good match. He had his chances at the beginning of every set. 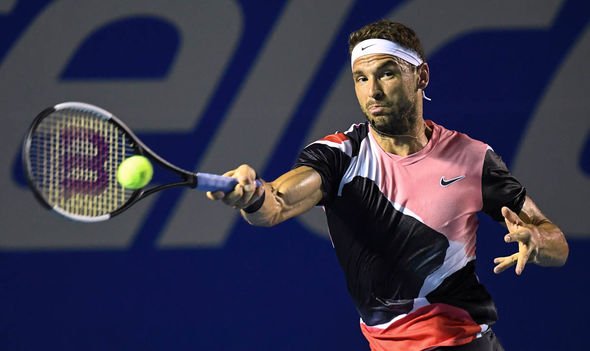 “I think I increased my level during the match, so it’s positive for me.”

Despite the winning just five games, the scoreline didn’t reflect the challenge Dimitrov posed for Nadal.

And the 19-time Grand Slam champion was complementary about Dimitrov’s game.

“For me, it [was] important to make him play from difficult positions,” Nadal added.

“If he is playing from comfortable positions inside the court then it is much more difficult.

“You are almost dead because he has the angles and all the shots and can go to the net very easy.

“So I needed to play aggressive, put him in positions that he doesn’t feel comfortable and that’s what I tried [to do].”