A defiant Rafa Nadal won an all-Spanish clash of the generations taming teenager Carlos Alcaraz 6-4 4-6 6-3 to stretch his winning run to 20 matches on Saturday and clinch a place in the Indian Wells final.

Nadal will take on American Taylor Fritz in Sunday’s championship in the California desert where a victory would see the 35-year-old equal Novak Djokovic’s record of 37 ATP Masters 1000 titles.

Earlier Fritz earned a spot in his first Masters 1000 final with a 7-5 6-4 win over seventh seed Andrey Rublev and will try to become the first American since Andre Agassi in 2001 to lift the trophy.

While Alcaraz produced a much better showing than the 6-1 6-2 beating he absorbed last year in his initial meeting with his childhood idol, Nadal signalled he is not yet quite ready to pass the torch to the 18-year-old.

‘I was playing well at the beginning but it was just so difficult to stop him with his amazing shots,’ said Nadal, who will contest his fifth Indian Wells final. ‘After that I can’t say I was in control because it is impossible to be under control against a player like him.’

Alcaraz sent a buzz through the stadium when he broke the 21-time grand slam winner to open the match with a thundering backhand winner.

But Nadal would claim the final break to clinch a fascinating open set. 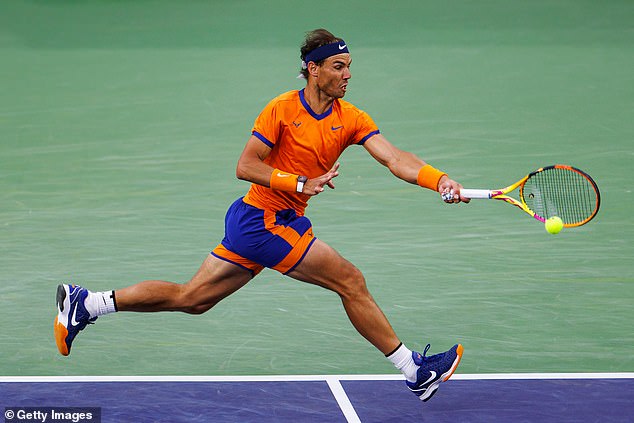 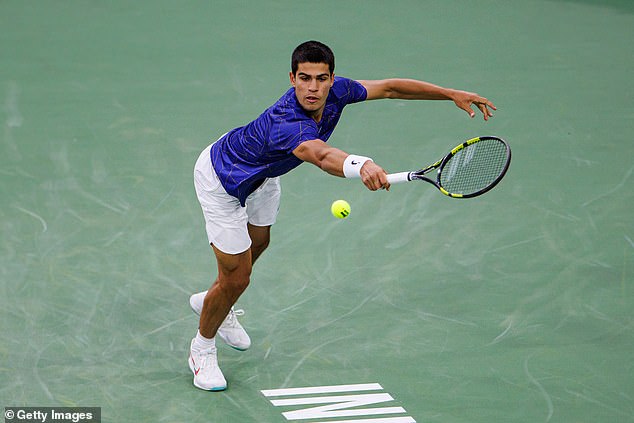 Alcaraz refused to wilt under pressure, though, and levelled things up in the second set

While Alcaraz was efficient converting both of his two break chances, Nadal kept the youngster under constant pressure with 17 break opportunities, converting three.

In the second set the two players battled each other and ferocious winds that had papers, water bottles and towels blowing across the court, with the chair umpire asking spectators to hang onto their possessions so play could continue.

With fans holding onto their hats Alcaraz had them on the edge of their seats during a 20 minute ninth game that was decided when he converted his seventh break chance and held serve to level the contest at a set each.

As the winds died down in the third set the quality of play from both players went up with Nadal raising his game just a little bit more than his fearless teenage opponent in a high-quality final set. 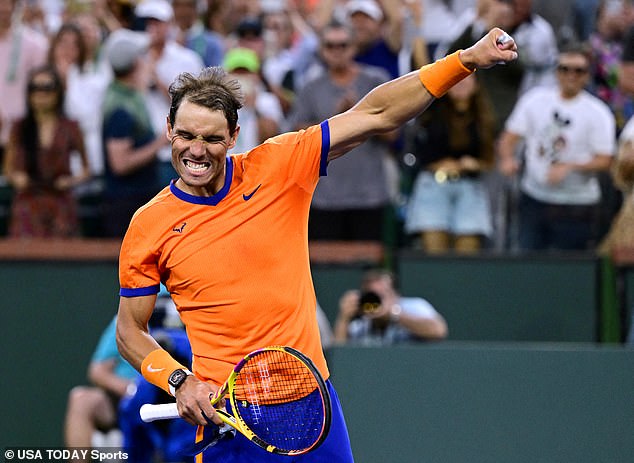 Nadal, as he so often has, refused to surrender, recording the decisive break to go up 5-4 then holding serve and raising his arms in triumph to a howling adoring crowd.

‘In the second the conditions became crazy,’ said Nadal. ‘It’s not fun playing in wind like this, it is sometimes a challenge and I can enjoy that.

‘In terms of tennis it is ok but in terms of stopping all the time it is not good.’

Rublev arrived at Indian Wells riding the momentum from back-to-back titles in Marseille and Dubai but saw his 13-match winning run come to a screeching end in the California desert. 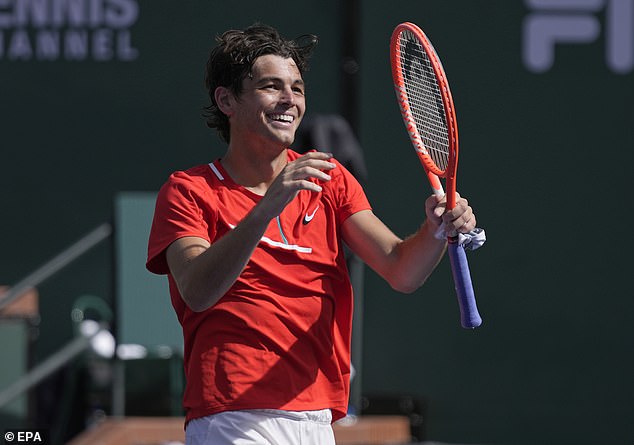 World number 20 Fritz got the contest off to blazing start by breaking Rublev at the first opportunity, charging into a 3-0 lead.

The American had looked in complete command serving for the opening set at 5-3 when Rublev finally began to hit his mark and broke back.

But Fritz did not lose focus, breaking Rublev a second time at 6-5 to avoid a tiebreak, leaving his opponent screaming into the desert sky and punching his racket after dropping his first set of the tournament.

The second set produced the tight baseline battle expected from the two 24-year-olds but Fritz again claimed the decisive break to clinch the match when Rublev dumped his return into the net.

Related posts:
Previous Post: ‘Our team’s gone to another level’: Why Parker is so bullish about Sydney’s season
Next Post: Charles Leclerc gave Ferrari engineers heart attacks with last-lap prank in Bahrain