Rafael Nadal’s wait for a first win at the Rolex Paris Masters will go on for another year at least after the top seed was overpowered in straight sets by Alexander Zverev in their semi-final.

While Nadal has reigned supreme on the Parisian clay for much of the last 15 years, the Spaniard has had an altogether less successful time across the city in the Bercy indoor event.

He was looking to reach the final for only the second time in eight attempts but had no answer to the fourth-seeded Zverev, who prevailed 6-4 7-5 in an hour and 39 minutes and who, by Nadal’s own admission, proved too strong.

“He was serving bombs and hitting the right spots all the time,” Nadal said.

“I returned better than the other days, but it was impossible at the beginning. I decided to go eight metres behind the baseline later on in the match and I think it worked better for me. But he’s playing well and hitting well.

“Of course I’m not happy about the loss, but that’s part of the game. I played against a great player, and I accept the defeat. He played a little bit better than me.” Victory could have been even more emphatic for Zverev, who had three chances to claim a double break in the second set before then dropping his serve as Nadal reeled off three games in a row to move 5-4 ahead.

However, Zverev bounced back and decisively broke in the 11th game before comfortably holding serve to claim his second victory in a row over Nadal, who has won five of their seven meetings.

Nadal will now head to London for the ATP Finals, which he has also never won, while Zverev goes in search of his third title since the start of October when he faces Daniil Medvedev in Sunday’s final.

“It’s going to be a final against Daniil. The two best players of the tournament are still left. I’m happy about it. I think he’s quite happy about it. We’re both not going to give each other anything.” 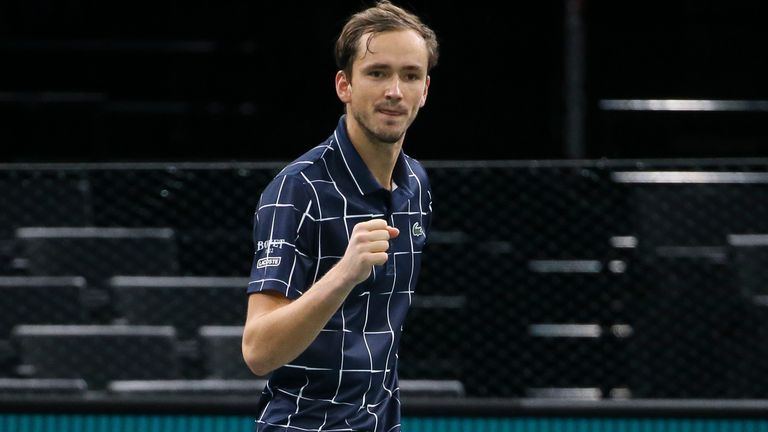 After reaching his first final in 13 months, the Russian said: “Something is working well here in Paris. Maybe I like the balls, maybe the court.”