Four-time major winner Naomi Osaka is out of Roland Garros and her participation at Wimbledon is up in the air after she said the decision to strip the All England Club of ranking points would likely affect her motivation.

The 24-year-old might end up playing just two matches combined in Paris and London across two years following the tumult of 2021 when the Japanese star pulled out of the French Open after a dispute over media commitments before opting to skip the grasscourt major.

Naomi Osaka is out of the French Open.Credit:Getty Images

On Monday in Paris, Osaka crashed out in straight sets to American Amanda Anisimova, the same opponent who sent her packing in the Australian Open third round.

Later, Osaka described the ATP and WTA’s bold reaction to Wimbledon’s banning of Russian and Belarusian players – withdrawing ranking points from the event – as well-intended but the execution “was all over the place”.

Playing Wimbledon without the rewards of ranking points for players has effectively rendered it an exhibition, albeit with the lure of significant prize money.

“I feel like if I play Wimbledon without points, it’s more like an exhibition,” said Osaka after the 7-5, 6-4 defeat to Anisimova.

“I know this isn’t true, right? But my brain just like feels that way.

“Whenever I think like something is like an exhibition, I just can’t go at it 100 per cent.”

Mastering both clay and grass has always been a battle for a hardcourt star such as Osaka, a two-time champion at Melbourne Park and Flushing Meadows.

“I’m sad about … how I did here,” the Japanese said. “I wish I could have done much better. 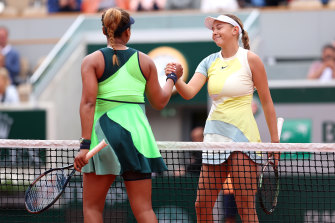 “I know that I don’t regret anything that I have done. Like, I’m happy that I spent extra weeks in Europe as opposed to what I would normally do.”

The ATP and WTA’s strong hand to withdraw points from Wimbledon, announced on Friday, was met with “deep disappointment” by the All England Club which argues the ban was the appropriate option under British government guidance.

“The decision is kind of affecting … my mentality going into grass – I’m not 100 per cent sure if I’m going to go there,” Osaka said.

“For me, it’s kind of like – I don’t want to say pointless, no pun intended – but I’m the type of player that gets motivated by … seeing my ranking go up.

On a day of eye-catching results in Paris, defending champion Barbora Krejcikova was eliminated at the first hurdle, the Czech beaten 6-1, 2-6, 3-6 by 19-year-old Frenchwoman Diane Parry.

An emotional Krejcikova conceded she “hit the wall” early in the second set after a strong start against a local hope buoyed by strong support on centre court.

Krejcikova hadn’t played on the tour since February after managing an elbow injury.

“I think I just collapsed physically, and, I mean, it was tough because I didn’t play the matches,” said the 26-year-old.

The crowd reacted with displeasure when Krejcikova took a toilet break.

“I don’t know why. But I guess whatever I do is at some point booed, so that’s how it is. That’s life,” she said.

Watch every match from Roland-Garros ad-free, live & on demand on Stan Sport, with courts streaming in 4K UHD.

Coverage of select matches commences on 9GEM from 6.30pm AEST each night.