Novak Djokovic has been labelled ’selfish’ by a leading doctor amid further controversy surrounding the 21-time Grand Slam champion’s vaccination status ahead of the US Open later this month. The Flushing Meadows tournament begins on August 29 and runs until September 11.

Djokovic recently reiterated his stance against the coronavirus vaccine and confirmed he had no intention of receiving a jab in the foreseeable future. Much of the recent debate has concerned the Serb’s participation at the US Open, but Dr John Reiner believes he has failed to set the right example since the beginning of the pandemic.

The 35-year-old, who defeated Nick Kyrgios to win Wimbledon earlier this summer, is not allowed to enter the United States as he is unvaccinated, which means he cannot compete in the US Open. Reiner – a Professor of Medicine and Surgery at George Washington University – believes Djokovic should be allowed to play at the fourth and final major of the year, but feels the Serb has failed his ‘public responsibility’ with a selfish stance.

“When I look at someone like Djokovic, someone who has made hundreds of millions of dollars playing tennis, who has lived this incredibly fortunate life, I look at him to be some sort of a symbol of public responsibility,” Dr. Reiner told Patrick McEnroe on the Holding Court Podcast. “Despite the fact that I do think he should play in the United States, I think he has totally failed to do that during the darkest point in this pandemic where he should’ve been really seen as an example, he has failed to do that. What he did in fact was display selfishness, that’s what it was like last winter, pure selfishness.”

Reiner insisted it was important for athletes to convey the right message to their fans. He added: “When I look to athletes, I look at them as people who sort of get to the public and to try and represent the best of us. When kids go to baseball games or they go to the US open and they’re rooting for a player…I look for a player to show me something that makes me want to reach higher levels in my life. Some demonstration of courage, or discipline, or sacrifice.

At Wimbledon and again in a recent statement, Djokovic applied pressure to the US government to change rules and allow him into the country. He is preparing and training on the hardcourt surface to ensure he is ready if he is allowed to play the US Open. 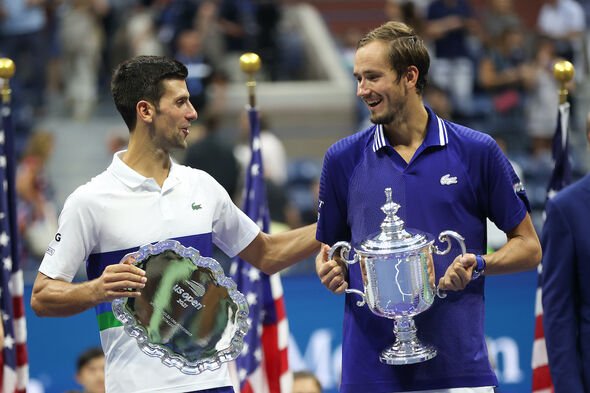 Reiner admitted that the vaccines do not prevent transmission of the virus, making the US travel rules relatively irrelevant. However, he believes the vaccines certainly protect individuals from falling extremely sick and ultimately prevent death.

“The vaccines are extraordinarily safe and the risk to an athlete’s health is much greater from the virus itself than it is from any potential vaccine. But having said all that, it seems like the United States policy, as implemented last October, has outgrown I think its usefulness to the public health.”