Novak Djokovic fought back to win a dramatic 19th Grand Slam title as Stefanos Tsitsipas suffered a Greek tragedy in the French Open final. And the world No 1 can now equal the male Major record held by Roger Federer and Rafa Nadal at Wimbledon in their GOAT race.

Tsitsipas had seemed destined to become the first Greek to ever win a Grand Slam as he won the first two sets in his maiden final. Djokovic, who knocked out 13-time champion Nadal in the semi-final, struggled with the heat, his contact lenses and the relentless groundstrokes of the 22-year-old.

He becomes the first man in the Open era to win each Major twice after outlasting and out-classing the world No.5.

And in the seventeen Majors since Stan Wawrinka won the 2016 US Open, Dominic Thiem is the only winner from outside the Big Three after Djokovic got disqualified in New York last year.

The Australian Open champion has won seven out of 11 Majors – a run of dominance similar to Tiger Woods at the turn of the century. 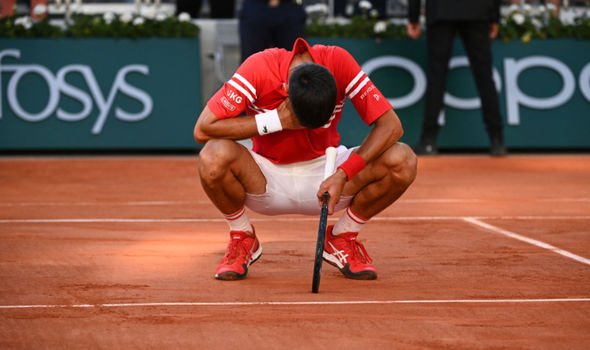 And he will be favourite to retain the title he won at Wimbledon in 2019 when the grass-court Grand Slam starts on June 28.

Djokovic fell to the red clay chasing a drop shot in the seventh game of the match and needed to save a set point at 4-5 before the tiebreak. He battled back from 0-4 down and Tsitsipas saved a set point with a spectacular forehand winner in the corner before taking the opening set in 72 minutes.

The second was littered with Djokovic errors – he won only five points on the Tsitsipas serve and was broken twice.

But a Djokovic toilet break then changed the match – and he fought back from two sets down to win for the sixth time in his career.

He needed only 33 minutes to win the third set 6-2 before the tiring Tsitsipas received medical treatment on his lower back.

And Djokovic raced to a 4-0 lead in the 34-minute fourth set before winning the decider.

Djokovic is now 5-1 in five-set Grand Slam finals with his only loss to Andy Murray at the 2012 US Open.

It was the first men’s final to go to five sets since 2004 when Gaston Gaudio beat his fellow Argentine Guillermo Coria.

Djokovic said: “It was once again an electric atmosphere. To play nine hours of tennis in less than 48 hours against two great champions was not easy.

“Physically it was very, very difficult for me in two, three days. It is a dream once more.”