Nick Kyrgios staged an “insane” comeback at the Australian Open against Ugo Humbert and then admitted: “Honestly, I don’t know how I did that”.

The Aussie finally played as well as he talks to claim a five-set thriller against Frenchman Humbert amid crazy scenes in Melbourne.

The world No.47 has been involved in a running feud with Novak Djokovic in the build-up to the first Grand Slam of the year. But when he faced two match points against the No.29 seed in the fourth set, another anti-climactic failure on the big stage beckoned.

But cheered on by a restricted but raucous Davis Cup-style crowd in his favourite John Cain Arena, Kyrgios fought back to triumph 5-7 6-4 3-6 7-6 6-4 and set up a third round showdown with No.3 seed Dominic Thiem.

It was the best atmosphere – and one of the top matches – since tennis returned after lockdown.

“It was a crazy one,” Kyrgios admitted. “I have been a part of a lot of matches, and that one has been definitely one of the most memorable ones. I’m still kind of in awe about the atmosphere.

“I was just speaking to my physio (Will Maher) about it. He’s seen me tank matches, play matches, epic five-setters, everything, and that was still one of the most crazy matches for both of us.

“We have seen it all, but that was insane. Honestly I don’t know how I did that.”

Kyrgios has always divided opinion Down Under as much as Ned Kelly. But in the last year at the age of 25, he has gone from underachieving enfant terrible to international Covid-19 cop and moral conscience of the sport.

And on Wednesday this complex character spoke openly about his own struggles – and his fear of losing in his first Grand Slam for a year.

“If you were inside my head, there were some dark thoughts in there,” he revealed. “I was thinking about all the s*** I was going to cop if I lost that match. That tends to be my career.

“The media doesn’t hold back on me. When I’m match point down second-round exit, I was almost afraid. I was afraid to come into this (press) room, go to my Airbnb and just read about it and take it all in. 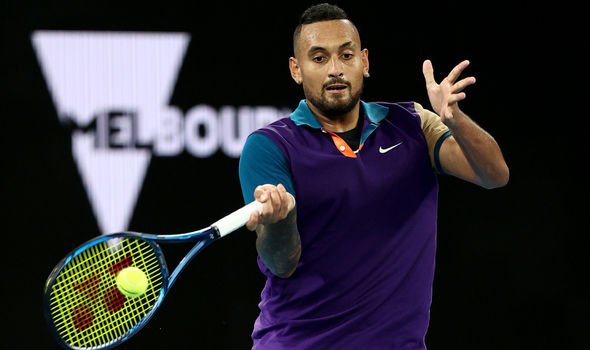 “I don’t know how I would have reacted to negativity this year.”

There was enough drama in one match for a whole Netflix series. Kyrgios deployed an underarm serve in the first set before smashing his racquet in frustration.

And umpire Marijana Veljovic replaced her fellow Serb Djokovic as his target in a running row about the let cord technology.

He slapped a ridiculous baseline tweener in the net – and produced shots of stunning brilliance. And he even held his nerve and concentration when hit with a penalty point in the third set.

“I know that many people don’t think that I have a heart or compete as hard as they want me to compete from time to time,” he said.

“But I have been through a lot, and I didn’t just put my hand in a lucky dip and appear here. 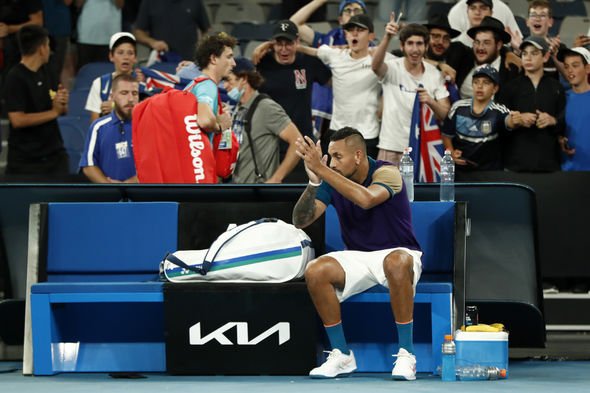 “There was a moment in the fourth where I broke back, I was, like: ‘Dude, this could be one of the most memorable matches of your career and you owe it to yourself’. Like, ‘I put myself in a position to have moments like this’.

“I always somehow, I keep surprising myself. Like at this stage in my career, I feel old. I just want to have a glass of red wine, man, after a match like that.”

And the American was equally as fiery about the electronic technology which has replaced line judges because of the pandemic.

Jamie Murray and Bruno Soares beat Cam Norrie and his American partner Marcos Giron 7-6 6-3 in the opening round of the men’s doubles.