Nick Kyrgios has raised an injury doubt ahead of his Wimbledon third-round clash on Saturday afternoon. The Australian star is due to face young Canadian Felix Auger Aliassime on Court 1 but has poured doubt over his further participation.

Kyrgios has enjoyed a positive campaign so far, in both singles and mixed doubles.

The 26-year-old beat 26th seed Ugo Humbert 3-2 in a brilliant first-round encounter before cruising past Gianluca Mager 3-0 in the second round.

He’s also participating in mixed doubles alongside Venus Williams this year, with the duo earning passage into the second round yesterday.

JUST IN: Sue Barker in hysterics as John McEnroe abruptly walks off Wimbledon

Ahead of his third-round singles clash this weekend, Kyrgios has revealed that he’s currently struggling physically, though.

He said: “Man, I’m hurting. Physically, I’m actually getting out of bed and I’m struggling.

“I just got a full body massage. Obviously, this sport demands a high amount of preparation and training.

“I’m trying to recover as much as I can and stay hydrated. I’m doing all the right things. My body is holding together now.”

Kyrgios is feeling good mentally, though, but emphasised that he’s currently playing through pain.

“I definitely wouldn’t be feeling like this the year I made quarters [2014], my body was so used to it.”

“Again, I’m okay with that. I’ve got enough, I think, to continue.

“I think mentally I definitely feel better, knowing that my body can still go the distance, I can still play the level and back up as well. So I mentally feel good.” 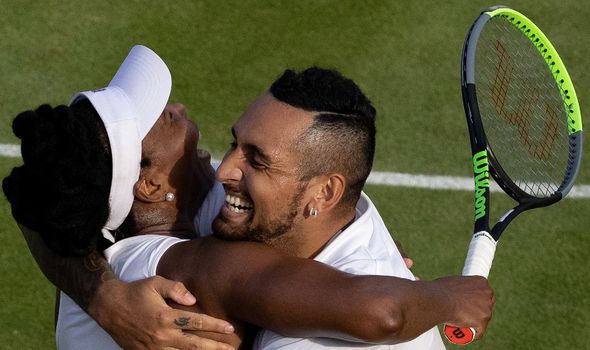 Wimbledon was hit with a few blows in the build-up to the 2021 competition, with high-profile stars withdrawing through injury.

Kyrgios isn’t seeded this year, but he always brings plenty of character and drama to SW19 and other majors in which he competes.

He sounds optimistic that he’ll continue in both of his campaigns at Wimbledon this year, but he isn’t in prime condition if his latest comments are anything to go by.