Nick Kyrgios's mum says it's been a 'tough year' for star

Nick Kyrgios has taken the opportunity to issue another dig in the direction of his long-time rival Stefanos Tsitsipas. During an interview with Jack Sock, the Wimbledon finalist explained he would be playing doubles with the American at the upcoming Washington Open.

While doing so, he made a joke at the expense of the Greek number one. “We’ve got a lot of doubles, we’ve got doubles in DC which I’m super excited about,” he began. “I’ve had Stefanos as a partner there so it can’t get much worse than that.” He then burst out laughing, while Sock looked shocked and quipped: “I think that’s my time to get out of here!”

The pair teamed up in 2019 to face the then top ranked team of Juan Sebastián Cabal and Robert Farah in their opening round. It was a tough match but ultimately Kyrgios and Tsitsipas succumbed to a 3-6, 6-3, 5-10 defeat.

The two players contested arguably the most intense match of the season so far in the third round of Wimbledon. It was a dramatic four-set clash, which saw both players awarded code violations after losing their temper.

It set the tone for a titanic battle that captivated tennis fans for better or for worse. The fourth seed apologised after he frustratedly smashed a ball into the crowd in anger which narrowly avoided the head of a fan. However, he claimed he was ‘triggered’ by the behaviour of his Australian opponent.

Kyrgios called for Tsitsipas to be defaulted for the incident and kicked off a constant exchange with the umpire during the heated match while insisting he did nothing to ‘disrespect’ or ‘bully’ his opponent during the match. After the fiery encounter, Tsitsipas did not hold back in the press conference.

“It’s constant bullying, that’s what he does,” Tsitsipas said. “He bullies the opponents. He was probably a bully at school himself. I don’t like bullies. I don’t like people that put other people down. 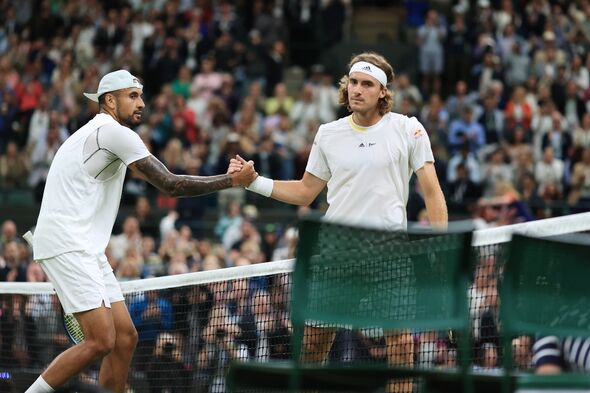 “He has some good traits in his character, as well. But he also has a very evil side to him, which if it’s exposed, it can really do a lot of harm and bad to the people around him.” Follwing their actions that day, Tsitsipas was fined $10,000 (£8,250) for the incident, while Kyrgios must now pay $4,000 (£3,300) for his inappropriate language.

During a very honest press conference, Kyrgios defended his actions on court and accused Tsitsipas of being ‘soft’. “I didn’t do anything,” he said. “I was actually like – apart from me just going back and forth to the umpire for a bit, I did nothing towards Stefanos today that was disrespectful, I don’t think. I was not drilling him with balls.”