Tennis pundit John McEnroe has offered Rafael Nadal advice as he bids to overcome his foot injury at Wimbledon, and believes that the Spaniard should be doing all that he can to try and collect the first Calendar Slam since Rod Laver in 1969. There was concern over whether the 22-time Grand Slam champion would be fit to play at Wimbledon, as he claimed he would no longer be taking painkiller injections in his foot to play after winning the French Open, but Nadal’s recovery has been positive and he is expected to try and win his third Major of the year.

After winning Roland Garros and the Australian Open, McEnroe believes Wimbledon will be the toughest leg of Nadal’s Calendar Slam pursuit. “Rafa’s toughest one is going to be this one to me because if you go by what he said at the French [Open],” he told reporters.

“He was injecting himself in his foot during some if not all of his matches. I can’t believe you decide not to do that. I’m not sure how he did it in the first place, and he’s still able to win seven matches and look incredible, right? The guy looked amazing.

“If I’m 36, I don’t know how much longer I’m going to play, going for the slam, I’d start shooting that foot up again and get through Wimbledon and the [US] Open. That would be me.

“He may be able to play a few more years. He also talked about wanting to be able to walk when he had kids. That’s a risk that no athletes want to take.”

During a press conference last week, Nadal confirmed that his wife was pregnant which prompted rumours that the world No 4 could be set to retire due to the added responsibilities of fatherhood coupled with his injury concerns. He confessed to reporters that he did not anticipate the news affecting his career. He said: “I don’t anticipate this meaning a change to my professional life.” 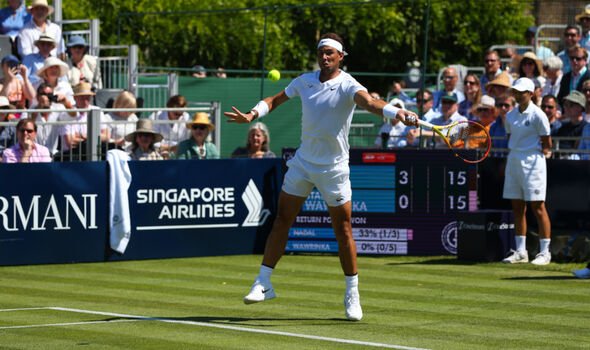 Nadal’s coach and former world No 1 Carlos Moya went one step further and suggested that becoming a father could spur the Spaniard on and give him extra motivation to play.

“In my time hardly anyone travelled with their children, it is also true that people retired at 30-32 years old to start a family,” he told Eurosport. “Now everything has been delayed a lot, that’s why many travel with their children.

“I don’t think this topic will be the one that takes him away, on the contrary, it will be an extra motivation, he is very familiar, he loves children, although I am sure that at first he will miss [the baby] a lot when he has to go on a trip.”