John Isner looked in serious discomfort after becoming the latest player to suffer a nasty fall on the slippery courts at Wimbledon. The tall American had resumed his first-round match against Yoshihito Nishioka on Court 18.

The action on Thursday got underway at 11am as scheduled after the first two days of pay had been interrupted by rain delays.

While the courts have been covered when drops of rain appear, there have still been a number of issues with players slipping on the grass.

The problem was further highlighted when both Adrian Mannarino and Serena Williams were forced to withdraw with injuries on Tuesday.

Novak Djokovic, Andy Murray and Nick Kyrgios have also struggled to keep their footing on the slippery surface. 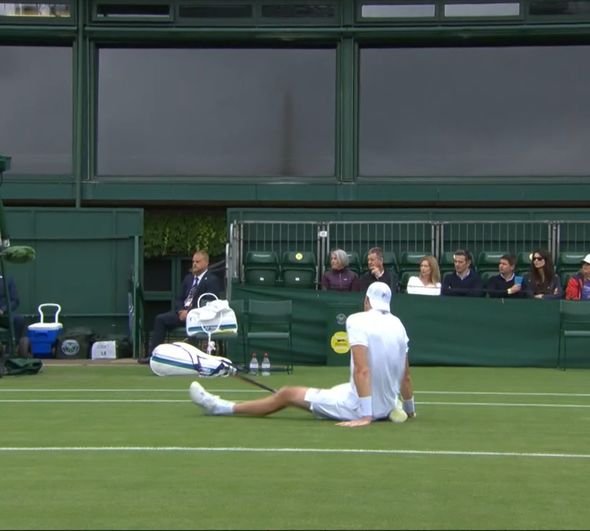 And Isner became the latest to take a tumble on the courts during his match against Nishioka.

The No 28 seed was coming into the net for a volley when his left foot slid away from his body, landing hard on his right leg.

He immediately winced in pain as he crawled towards the net before grabbing his right leg.

Isner took some time to recompose himself before reassuring the umpire that he was fine to continue.

All England Club board member Tim Henman though has hit back at any notion the preparation on the courts are any different to previous years.

The former British No 1 believes the wet weather prior to the start of the tournament has played a factor in making the courts more slippery.

He said: “The preparation of the courts has been absolutely identical. There’s no doubt the one thing that has been different this year is the weather in the lead up to the tournament, we had a very damp practice week.

“The court and the plant doesn’t have the chance to dry out. Add that the roof has been closed for the first two days and that is why you are going to see some slipping and sliding.

“Early in the tournament the court is at its most lush and it can be a bit challenging moving.

“We don’t want to see injuries. The ground staff are meticulous in their preparation of the courts and nothing has changed.”