Naomi Osaka made a confident start to her French Open campaign at Roland Garros, but two-time quarter-finalist Angelique Kerber fell at the first hurdle on opening day.

The four-time Grand Slam winner divided opinion ahead of the tournament with her decision to boycott press conferences citing mental health, but the debate made no impact on her performance on a sun-bathed Philippe Chatrier court.

She admits to not being completely comfortable on clay, and she missed last year’s French Open with a hamstring injury while her preparation has been far from ideal this year, with only three matches under her belt on clay after early defeats in Madrid and Rome.

But the 23-year-old Japanese star, who is seeking to win a third-straight major title, avoided any real drama in a comfortable 6-4 7-6 (7-4) victory over Romanian Patricia Maria Tig.

Despite her media snub, Osaka did take part in a short and rather awkward on-court interview for the few hundred fans allowed into Court Philippe Chatrier.

“I’m very glad that I won,” said Osaka, who skipped the tournament last year. “It’s a very beautiful court. I’ve only played two matches here, one was before the roof and one is right now. Hopefully I’ll keep it going.”

Regarding her movement on clay, Osaka said: “I would say it’s a work in progress. Hopefully the more I play, the better I’ll get.”

Osaka will take on another Romanian in Ana Bogdan, who beat Italian Elisabetta Cocciaretto 6-1 6-3, in the second round. 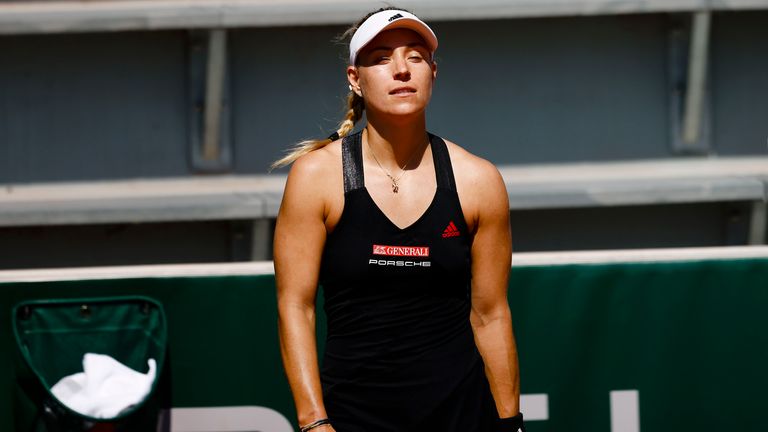 Angelique Kerber’s poor record at the tournament continued when she was knocked out by Ukrainian qualifier Anhelina Kalinina.

The 26th-seeded German bowed out with a 6-2 6-4 defeat for her third first-round loss in a row on the Paris dirt.

“I will try to learn from the match now because I played good the last few weeks and I had good matches,” she said.

“I did the best preparation I could do in the last few weeks on clay, but yeah, it’s fine, and now I’m looking forward to Wimbledon for the grass court season, and it sounds much better for me, so I’m happy that the next Grand Slam is on grass.”

While 1,000 fans were allowed on the ground last year, this year’s French Open will welcome up to 5,388 spectators a day before opening its gates to 13,146 a day from June 9 as COVID-19 restrictions ease up in France.

There will be night sessions for the first time at the French Open this year, with the big match of the day starting at 9pm local time (8pm BST) from Monday onwards with Serena Williams in action against Irina-Camelia Begu of Romania.