It was meant to be one of the happiest times of her life. Elina Svitolina had just discovered she was pregnant with her first child, but the joy she shared with her partner, fellow tennis player Gael Monfils, was painfully short-lived: days later, her native Ukraine was invaded. Suddenly, it did not seem like the time to celebrate.

It is why, even now, a message of congratulations for her impending arrival provokes a grimace. “Thank you,” she says. “It’s been a mixture of feelings. It was tough for me to really enjoy it.”

Svitolina has made it her mission to become one of the most outspoken critics of the invasion from the world of sport.

She spent hours on calls with journalists and speaking on television, relentlessly imploring ally states and the public to help her homeland in any way they could. Through it all, she continued to play, even reaching the quarter-finals of the Monterrey Open shortly after the war began.

But in May she finally announced to the world that she and Monfils were expecting a baby girl in October. Even if she was not formally taking maternity leave, however, she says she could not have carried on playing.

“When the invasion started, it was tough mentally to compete and to have my family in Ukraine, it was tough to deal with,” she says.

Elina Svitolina celebrates a point at the Miami Open just weeks after Russia’s invasion of her native Ukraine.Credit:Getty

“My priorities and perspective changed. I felt not in the right place when I was playing. It was tough to focus 100 per cent on my job, that’s why I wanted to share my view. But right now I’m happy I could take my time, refocus, find where I’m needed.”

Though her parents left Ukraine, she still has family and friends in the country – some even returned in order to volunteer – and she felt an urgent need to be part of the solution, too.

Since stepping away from the tour, the former world No.3 has been splitting her time between various bases in Europe, but always with a view to how to raise funds for her home country.

She is an ambassador for fundraising platform United24, a role that led her to have discussions with Volodymyr Zelensky, the Ukraine president. This month, she was at the Ukraine Recovery Conference in Switzerland to take part in talks.

‘A lot of players didn’t even come to us to ask how our family were doing. It created tension.’

Tomorrow, she is hosting a charity exhibition event in Krakow, where she will be in the umpire’s chair while world No.1 Iga Swiatek and former top-ranked Polish player Agnieszka Radwanska face off, with Ukrainian tennis player Sergiy Stakhovsky and former footballer Andriy Shevchenko making cameo appearances. All proceeds will go to children affected by the invasion, which has so far claimed at least 10,000 lives.

“I want for people to know what is happening – that the war continues – because I feel like it’s faded away a little bit from the news,” she says. “It’s very important to do -everything in my power.”

But while Svitolina’s attention has veered away from tennis, little did she know that her sport would become embroiled in its most politically charged debate in recent memory over the very war that turned her life upside down.

Wimbledon’s decision to ban Russian and Belarusian players from the tournament provoked the Women’s Tennis Association and Association of Tennis Professionals to remove its ranking points. Svitolina, however, is insistent Wimbledon was right. 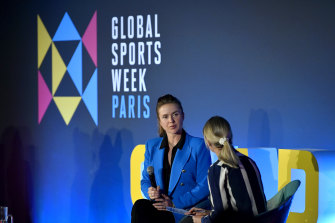 Svitolina has worked tirelessly to raise awareness of the conflict despite announcing she is pregnant in May.Credit:Getty

“All the Ukrainians, we’ve been having roundtables with the WTA, the International Tennis Federation, grand slams, explaining the help we need, but they chose to go their separate ways,” she says.

“I was sad to find out they took their position. But I have a lot of respect and want to thank Wimbledon for making players feel supported, as well as Ukraine.” For Svitolina, the controversy exposed the lack of empathy she experienced in the locker room prior to her maternity leave.

There had been suggestions ahead of Wimbledon that at one stage Russians and Belarusians may have been allowed to compete, if they were willing to denounce the invasion and Vladimir Putin’s regime. While the risk of doing so has been cited by geopolitical experts, Svitolina has little sympathy for their silence.

“Tennis players are pretty much living outside of Russia, training in Europe and the States. This is their decision,” she says. “A lot of players didn’t even come to us to ask how our family were doing. It created tension.” 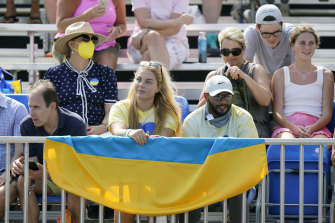 Fans display the Ukrainian flag at the Miami Open in March.Credit:AP

Since Wimbledon, two of Russia’s top-ranked players have spoken candidly about the situation. Andrey Rublev – who wrote “No War Please” on a camera lens ahead of the invasion – and compatriot Daria Kasatkina even discussed the possibility of changing their citizenship in order to compete.

Kasatkina also came out as gay, criticising the treatment of LGBTQ+ people in Russia. The repercussions are already being felt, with Sofya Tartakova, both players’ PR executive, dropped from her presenting job on Russian state television for bashing the criticism Rublev and Kasatkina had received on the network.

It may be a sign of Russian tennis players pushing back, and potentially could heal some locker-room relationships, but for Svitolina this is a mere sideshow to the real issue.

“Our Ukrainian people are dying back home, we lost our homes, we lost our training bases, our families are all in danger,” she says.

“Sport has a great responsibility with a lot of media attention, it helps people to understand what is really going on. This is my mission right now.”