Emma Raducanu has suffered defeat on her professional doubles debut as herself and Clara Tauson were defeated 6-4, 6-1 by Monica Niculescu and Lucie Hradecka in the opening round of the Citi Open. Raducanu’s outing in Washington D.C. begins her North American swing as she prepares to defend her US Open title at Flushing Meadows next month, however it didn’t get off to the best of starts.

It was the British teenage star’s first outing back on the court since her dissapointing defeat to Caroline Garcia in the second round of Wimbledon last month. There is no doubt the US Open champion was looking to get her game back on track as she begins her preparations to defend her crown at Flushing Meadows but it was her opponents who started quickest as  Niculescu and Hradecka flew out of the blocks to take an early 2-0 lead in the first set.

Things did not stop there though, as after holding onto their serve in game three, Niculescu and Hradecka broke Raducanu and Tauson’s serve for a second time to move four ahead. The losing pair were yet to get started after their opponents flew out of the blocks. The US Open champion and her partner soon fought back by breaking serve in game five, before then drawing their opponents back in at 4-2.

The fightback proved too little too late in the opener though, as Niculescu and Hradecka took the opening set 6-4. Like Raducanu, Tauson is also in the early stages of her professional career with the pair donning a combined age of just 38, but their experienced opponents dwarf that with a total of 71.

There is no doubt the Brit had already proven that is age is just a number following her historic US Open triumph – but this time around it was experience that was prevailing in the early stages. It was more of the same in set two, as a quick start proved pivotal with the Niculescu and Hradecka breaking serve in game four to move 4-1 ahead. 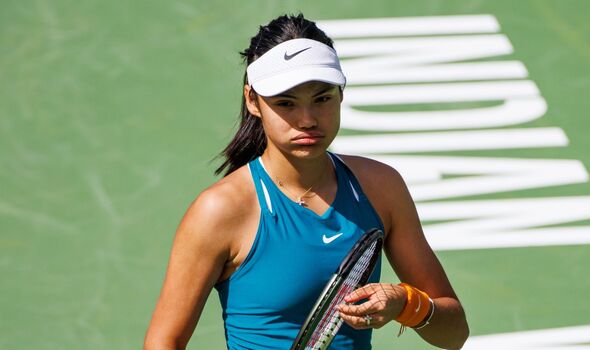 Edging closer to victory, Raducanu’s rivals broke serve once more to move 5-1 ahead, and one game away from advancing. The teenage pair’s fate was finally sealed just minutes later, as Niculescu and Hradecka prevailed in the final game to take a straight sets win.

Defeat for Raducanu means she will now turn her attention to the singles side of the Washington D.C. event, and she will take on Louisa Chirico in the early hours of Wednesday morning.