Emma Raducanu is out of the Transylvania Open after suffering a straight-sets defeat by Marta Kostyuk.

With a semi-final against former world No1 Simona Halep on the line, Raducanu could not replicate the composure she showed while en route to lifting the US Open trophy last month.

The 18-year-old hit 41 unforced errors in a shaky performance against her Ukrainian opponent on Friday, winning just 52 per cent of points on her first serve and mustering just one break point – which she failed to convert – in the 6-2 6-1 loss.

In stark contrast, 19-year-old Kostyuk put produced a consistent, solid showing, breaking the British No1 twice in the first set and three times in the second to move into the last eight.

The No6 seed secured her first break of serve in the opening game, with Raducanu ruing some early double-faults as she wasted a 40-15 lead.

There were more errors from Raducanu in the second game as Kostyuk consolidated her break with a hold of serve, though Raducanu responded perfectly by holding her own serve to love.

There was some impressive hitting off both sides from the two players in the next game, which Kostyuk eventually won, before Raducanu produced her best spell of serving to hold again.

After Kostyuk moved into a 4-2 lead, however, Raducanu’s composure began to desert her. The Briton followed another double-fault by smashing a forehand low into the net to find herself down a double-break.

Some aggressive shots were then exchanged in the following game, before Kostyuk caught out the No3 seed with a forehand slice to seal the first set 6-2. 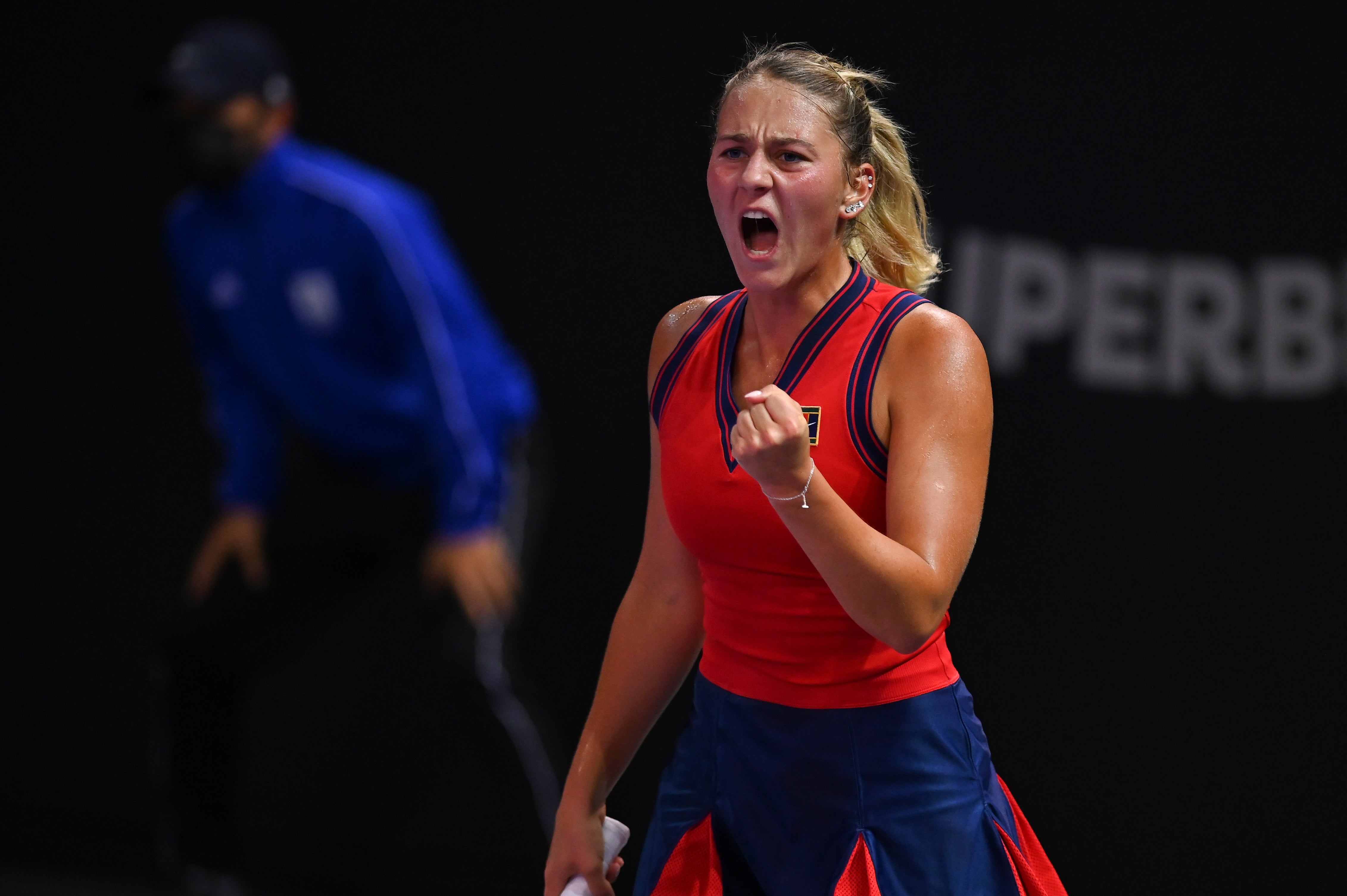 A nightmare start to the second set ensued for Raducanu, whose serve was broken to love – yet another double-fault rounding out the game.

Kostyuk capitalised on Raducanu’s frailty with some big groundstrokes to hold serve, though the teenager responded with her best shot-making of the match to momentarily stem the tide.

Raducanu could simply not put a dent in her opponent’s serve, however, as Kostyuk eased into a 3-1 lead in the second set.

More errors piled up for Raducanu, who once more surrendered a service game with a double-fault.

The 18-year-old tried to rally, figuratively speaking, but Kostyuk’s defence was simply too strong and she held serve to move within a game of the victory and a semi-final spot in Cluj.

Under immense pressure, Raducanu was able to save three match points on her own serve but ultimately sent a wild backhand sailing wide to fall to a 6-2 6-1 defeat, having spent exactly one hour on court.

While Kostyuk takes on two-time Grand Slam champion Halep – who is competing on home soil – in the semi-finals, second seed Anett Kontaveit faces Sweden’s Rebeca Peterson on the other side of the draw.

Raducanu, whose father is Romanian, is expected to remain in the country to visit family in Bucharest in the coming days.