Emma Raducanu should fear no-one at Wimbledon because there is no favourite for the wide-open women’s title, Anne Keothavong has claimed.

The teenage wildcard sensation will face Ajla Tomljanovic on Manic Monday – with the potential prize of meeting world No 1 Ash Barty in the quarter-finals.

And Britain’s last singles player will get an extra boost in the last eight with Centre Court and No 1 Court becoming the first UK sporting arenas to return to full capacity from Tuesday for the rest of the tournament.

Serena Williams went out last week while Angelique Kerber is the only former Wimbledon champion left.

Former British No 1 Keothavong said: “There is no-one who should faze her in the draw. It’s so unpredictable, which should give someone like Emma confidence. I think all the lower ranked players are aware of it and everyone feels like they’ve got a chance, which is great for them.

“Against Tomljanovic, I have no doubt that she should go into that feeling and knowing that she can absolutely win this match. We’re talking about a future top-10 player. She’s the real deal.”

Raducanu, who has become the youngest ever British woman to reach the last 16 at Wimbledon, said: “The way that I’m approaching my matches is each time I’m thinking to myself, ‘Why not?’

“Like today, I was like, ‘Someone has to be in the second week, why not me?’ I think that’s how I’m approaching it. I’m just trying to stay here as long as possible. I’m just having such a blast.”

Her full-time coach Matt James added: “I don’t think Emma really fears anyone. She’s beaten a few of the girls who are top 30 in the world in practice sets so it’s not a surprise the tennis is holding up. And it’s great she’s getting some experiences to elevate her even more.”

Tomljanovic has revealed she will draw inspiration from her Italian boyfriend before bidding to end Raducanu’s dream Wimbledon run.

The Zagreb-born Aussie showed her feisty side in her verbal spat with Jelena Ostapenka after reaching the fourth round for the first time.

But the world No 75 has admitted she has struggled with bubble life and restrictions during Covid-19. And she said she had learned about handling the on-court pressure from world No 9 Matteo Berrettini, who will also be playing on Monday.

“I actually think what’s most impressive about him is his mental side,” Tomljanovic said. “Obviously I’m more on the inside so I know that it’s not always coming naturally to him to be that positive.

“Sometimes it gets the better of me and obviously him too, but for the most part he tries really hard to get through it and use it to his advantage.

“I think it’s impressive and I think he’s working on it daily, so I try to draw on that sometimes.” 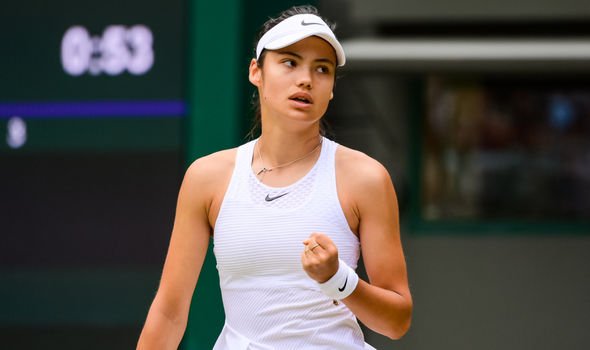 Tomljanovic accused former French Open champion Ostapenka of faking an injury timeout and told the umpire: “You know she’s lying, right?” The insults from both sides continued after the match.

But the Aussie, who used to date Nick Kyrgios, added: “My feelings towards winning exceeds any drama that happened, because for me it’s a huge moment in my career, especially with everything that I have been through.

“I think when COVID hit, everyone struggled in their own ways. I didn’t take it that well. I think at the age of 27 it definitely got to me where I’m, like” Well, when is it going to happen? When is it going to click? Then you question a lot of things.

”Making the fourth round here is just such a huge pat on the back to myself and the people around me that saw it. I’m very proud of that, no matter how I go from here.”

Tomljanovic called Raducanu’s run “unbelievable” and added: “She will definitely have the crowd. I hope we both play our best and whoever wins, wins.”