Dominic Thiem is a doubt for Wimbledon after retiring from his match against Adrian Mannarino in Mallorca on Tuesday. The Austrian star hurt his wrist while hitting a forehand and looked in discomfort as he left the court.

After world number three Rafael Nadal withdrew from the summer Grand Slam, Thiem was set to enter the competition as the fourth seed.

In Mallorca, he was playing in his first match since being knocked out of the French Open first round by Pablo Andujar.

Thiem made a great start to his grass-court campaign, finding himself 5-2 up in the first set against Mannarino.

However, there were worrying scenes after a forehand shot didn’t go to plan and the match was cut short.

JUST IN: Boost for Djokovic’s hopes of Olympic Gold with former medallist out

Thiem, cutting a deflated figure, called his trainer and said he ‘heard it crack’ while holding his right wrist.

Shortly after a brief conversation, he signalled to Mannarino that he could not continue and then left the court to a warm ovation from the crowd.

The world number five’s physiotherapist, Alex Stober, has since revealed that he would have suffered ‘a twist’ at best.

He told Krone.at: “At the moment, one can only guess. He sustained a wrist injury, a kind of twist.

“Cracking is never a good sign. Let’s hope that it was just a twist in the wrist, with the carpal bone maybe a slight capsule injury.”

The reigning US Open champion is now expected to stay in Spain and consult a wrist specialist in Barcelona.

He’ll then decide whether he’s in the right condition to compete at this year’s eagerly-anticipated Wimbledon.

Following Nadal’s confirmed absence, also losing Thiem would come as a significant blow for the tournament.

The action starts on Monday and will run through to July 11, the same day as the Euro 2020 final across the other side of London at Wembley Stadium. 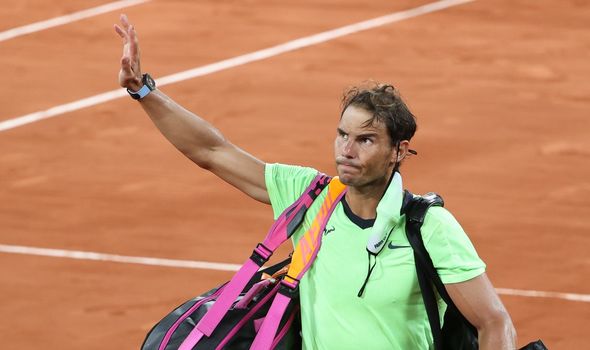 Roger Federer will be ready to claim a record-extending ninth Wimbledon title but may meet Djokovic in the quarter-finals.

If Nadal hadn’t withdrawn, the Swiss ace would’ve been the eighth seed and therefore could’ve avoided Djokovic until the final.

Both players will be ready to put on a show for the returning Wimbledon crowd if, or when, they eventually meet on the grass.