Life at the top isn’t easy, much less so when you’re coming off the back of a six-week break from competition. But it didn’t take Daniil Medvedev long to rediscover his groove in Mexico on Wednesday.

The world No. 1 has joined Britain’s Cameron Norrie in the quarter-finals of the Los Cabos Open following a 6-4, 6-3 win over Rinky Hijikata. The win was Medvedev’s 250th as a professional, not to mention his first match back on the court since late June.

He would have competed at Wimbledon were it not for the All England Club’s ban against Russian and Belarusian athletes. And Medvedev admitted there are improvements still to be made as he regains full match fitness.

“It’s definitely not that easy to play after you stop for a while, especially [playing my] first match on hard courts in a long, long time, since Miami,” said the reigning U.S. Open champion ahead of his title defence at Flushing Meadows. “Sensations were not bad. I could have just broke a little bit more, but when you win, everything is fine. I have to play like this in the next matches.”

Opting to play Los Cabos ahead of the Citi Open in Washington D.C., Medvedev’s preprations are underway as he looks to defend his first major trophy. The 26-year-old beat Novak Djokovic in New York last year to clinch the U.S. crown, though there are fears ‘Nole’ will be barred from playing in 2022 because he’s still yet to receive the Covid-19 vaccine.

Having come through his comeback test with flying colours, Medvedev is due to face Lithuania’s Ricardas Berankis in the final eight of Los Cabos on Thursday. The pair are poised at one win apiece from their two encounters to date, with Berankis staging a straight-sets upset when they last met in the opening round of the 2019 Dubai Tennis Championships. 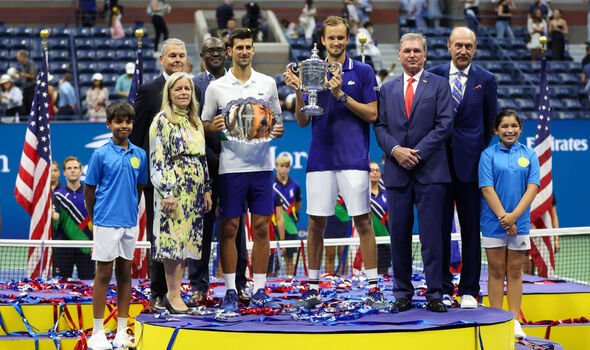 Despite the inevitable frustration of being banned from Wimbledon, Medvedev’s No. 1 status was preserved as a result of SW19 being stripped of its ranking points. It means the Russian will almost certainly enter his U.S. Open defence at the summit, with nearest rivals Alexander Zverev (No. 2) and Rafael Nadal currently (No. 3) struggling with injuries.

The tests to come at Los Cabos will give a better understanding of Medvedev’s chances at Flushing Meadows, and a maiden title in Mexico would do no harm to his confidence. World No. 12 Norrie will have something to say about that as he seeks a second straight trophy at Los Cabos, hopeful that Medvedev’s time away from the court has left a few cobwebs.