Bernard Tomic got so carried away on live television that he joked he ‘kind of s**t’ himself in trying to seal his first round Wimbledon qualifying win on Tuesday.

The outspoken Aussie splits opinion among tennis fans but there was little surprise when it was revealed he was the player to have sworn in front of the cameras following a comeback win.

Tomic lost the first set to Blaz Kavcic and given his history, it was assumed that Tomic may simply give up and be beaten comfortably.

He instead dug in to win the second set 6-4 before closing out a deciding set 6-3, despite his nerves almost getting the best of him.

There are three qualifying rounds before a player will have earned a spot in the main draw of the SW19 championships.

The Aussie, now ranked as low as No 224 in singles, famously reached the quarter finals at Wimbledon a decade ago. 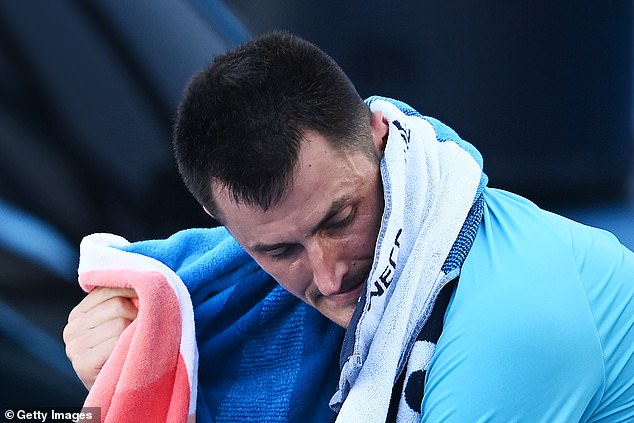 But his steady decline, which has included a handful of on and off court controversies, means he is now tasked with slugging it out at Roehampton in qualifying.

‘Absolutely everything feels irritating at that moment: the wind, the ball kids, everything,’ he added.

‘I haven’t played grass in two years so playing a first match and winning is huge.

‘These moments – I’ve played many, many matches on grass so I’m comfortable – they’re tough to get out of so it was important to hold there.’

Tomic navigated qualifying for the Australian Open earlier this year before he was dumped out in brutal fashion in the second round by Canadian star Denis Shapovalov.