Andy Murray has revealed he more than held his own against Roger Federer as he battled his former rival in a practise game behind closed doors at Wimbledon. Staff and selected members of the media were treated to the spectacle that took place on Court 14.

The Brit is looking to build some confidence and rhythm as he makes his long-awaited return at SW19.

Murray is due to face Nikoloz Basilashvili on Monday when things get underway in west London.

After two hip surgeries, Murray wants to get back out in front of his fans at Wimbledon.

The two-time champion has been sharpening his tools ahead of his opener against 24th seed Basilashvili, taking on Federer and a host of other opponents on the practise courts.

And Murray is insistent he has been competing with everybody he has faced, including the 20-time Grand Slam champion.

“I’m not going out there and getting whacked,” said the Scotsman..

“I’m competing well with all of the players that I practised with.”

Murray, who won Wimbledon in 2013 and 2016, is relishing the chance to play in front of the home crowd again after the struggles of the pandemic.

“I’m delighted that I can be back competing here again,” he added.

“I’m most excited about being in front of a big crowd and the fans. That’s really something I’ve missed a lot.

“I know it’s not normal, but it feels somewhat normal now.

“We’re a couple days out from Wimbledon, with all the players around, practising, everybody doing the media stuff, knowing that in a couple of days’ time we’ll be playing, not in front of a full crowd, but in front of a lot of people.” 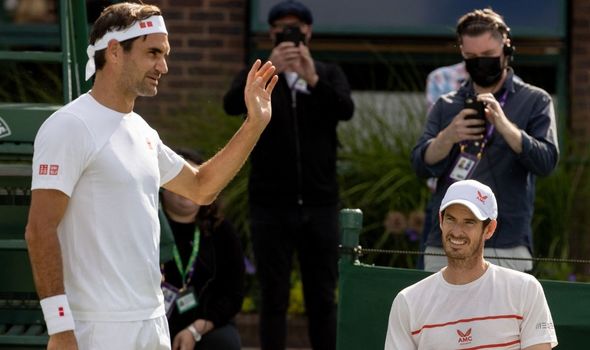 Murray has not featured at Wimbledon since 2017 when he was forced to retire against Sam Querrey in the quarter-finals due to injury.

It’s been an emotional rollercoaster since then but now Murray is simply looking forward ahead of the final stretch of his career.

He has also been selected to represent Great Britain at the Tokyo Olympics.

Murray is not expected to make a decision on his participation until after Wimbledon.