Melbourne defender Jake Lever has described the stalemate between the AFL and the AFL Players Association over how much of a wage cut the players should take as "very difficult".

With the 2020 season shut down until at least May 31 as a result of the coronavirus pandemic, and essentially no money coming into the game from the broadcasters as a result, the league has asked its 800-odd players to take significantly less money than what they’re supposed to receive.

Lever was frustrated by the public perception that the pay dispute illustrates how footy players haven’t yet fully grasped the magnitude of the coronavirus crisis and the impact it’s having on millions of Australians who have lost their jobs and are lining up outside Centrelink for financial assistance.

But the former Crow insisted he had a handle on how the community was being affected and said that AFL players weren’t immune from the economic catastrophe that is gripping the country.

“For me it is really hard, it’s not just the everyday Australian, it’s some of my close mates are doing the exact same thing as these guys at Centrelink,” Lever told SEN on Thursday.

“And you do definitely get to see the everyday Australian life that you do see, but for us I think it’s really important to put out there that footballers are going to be the exact same. 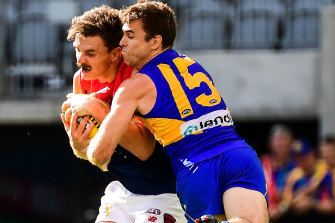 Melbourne’s Jake Lever says AFL players are sensitive to the struggles of the community at this time.Credit:Getty Images

“I just saw on Instagram, I’m not sure if it was for real, but a Richmond Tiger, a person that I played football with, he was out working this morning trying to earn money as a sign man on road construction.

“There’s going to be people in the AFL world, especially players, that are going to have to put up their houses for sale because of this situation and we’re just like everyone else.”

The AFLPA wants a 50 per cent cut of wages for the next eight weeks, but the AFL wants them to take a much bigger cut.

“For me at the minute it’s understanding that it [the negotiation] is probably something that could potentially take three, four months but it has to be done in a very short amount of time,” Lever told SEN on Thursday.

“You’ve already seen that the players are happy to be able to take a pay cut in the months that we’re not playing, and then the AFLPA and AFL are working together on what that looks like.

“I look at it as something bigger than football at the minute, it’s a world health pandemic and there’s things going on in the world right now that AFL football is probably a minute thing in it.

“But obviously it’s very hard at the minute.”

Making things harder for Lever was earlier this week hearing AFL legend Leigh Matthews say he had lost respect for the players in the way they’ve conducted themselves.

“In the end I think it’s just a situation that no one’s ever been through, so for us as players, for the AFL, for the AFL clubs, it’s obviously a really difficult situation we’re going through right now,” Lever said.

“I’ve heard a lot of people say there’s no textbook to be able to get out and actually be able to look at and then obviously go off that.

“I guess the comments like that, you do sit back and do ponder,” Lever said of Matthews’ comments.

In the meantime, Lever is continuing to train by himself in the hope that the season resumes in a couple of months.

“That was difficult but I think that every single AFL player will be motivated to get back and put on a show for the fans, whether that’s with crowds or without crowds.”

At least three head coaches have been forced to take immediate leave as worried clubs look to quickly cut costs with the NRL competition suspended indefinitely.

Less than 24 hours after players realised they would be without the sport they love for at least a couple of months, Penrith's Ivan Cleary and Canterbury's Dean Pay were told to start their annual leave. 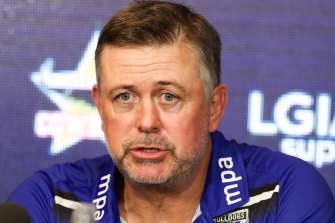 Panthers Group chief Brian Fletcher, whose five leagues clubs were forced to close their doors on Monday – and are potentially facing a $30million-plus loss to their bottom line – confirmed Cleary would be on leave for a month.

"Rather than take leave at the end of October, he'll take it now while there's nothing on. It makes sense with all the players away,'' Fletcher said.

Bulldogs boss Andrew Hill and his Leagues Club counterpart Greg Pickering were forced to lay off 400 staff across both departments earlier in the week. Hill found it tough to tell Pay and his team the bad news on Tuesday. 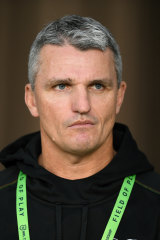 Penrith’s Ivan Cleary will be on leave for a month.Credit:AAP

It's understood once Pay's holidays are exhausted, he will be forced to take leave without pay.

"There's no doubt the pain has been felt by everyone across our community, our game and our licensed club in the past 48 hours,'' Hill said.

"I've had to tell Dean and his staff today they are no different to the administration staff and they have to take leave while their is no competition going.

"It's a difficult time for everyone involved, but every decision we're making is to ensure that when the competition is back up and running, we can bounce back and be as resilient as we can. We'll make the tough decisions now to protect the club in the future.'' 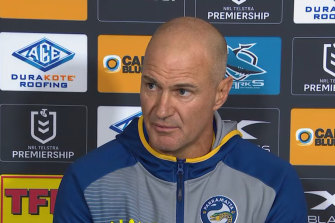 Brad Arthur is expected to start leave next Monday.Credit:Nine

It is no coincidence Cleary and Pay coach clubs that are heavily backed by leagues clubs no longer operating because of federal government restrictions in response to the COVID-19 pandemic.

Parramatta's long-serving coach Arthur was on top of the world on Sunday night after his side blew the Gold Coast Titans off the park, but is tipped to start a break next week.

Coaches have never been known to take long holidays, and often use part of them for fact-finding missions. Arthur is no different.

Several other coaches contacted by The Sydney Morning Herald, including South Sydney's Wayne Bennett, said they were unaware of any moves to force them to take leave.

The widespread belief among the coaching fraternity is players will need a full month of training before the competition restarts.