Emerging superstar Zaaki enhanced his Cox Plate prospects in scintillating style with a straightforward triumph in the group 1 Underwood Stakes, the highlight of Sandown’s racing year.

The UK import, trained by Sydney-based Englishwoman Annabel Neasham, started at the prohibitive odds of $1.20 – the sort of price usually offered in the past for the likes of Black Caviar and Winx.

Those who opted to “buy” money on the grounds that the dividend of 20 per cent on capital employed was far more enticing than current paltry bank interest rates would have had few reasons to be concerned during the 1800-metre event.

With only five runners, there was always the possibility that this could become a messy tactical affair – a stop-start staccato contest with the riders trying to outfox each other as they looked to unsettle the red-hot favourite.

But Craig Williams, stepping in for the ride with Zaaki’s regular pilot James McDonald in Sydney, was leaving nothing to chance.

Williams eased his partner to the front near the top of the Sandown straight, and neither multiple group 1 winning mare Probabeel nor the classy Superstorm, who had won the group 2 Feehan Stakes earlier this month, could trouble Zaaki.

He will head to Caulfield for his next start, the group 1 Caulfield Stakes (now known as the Might and Power Stakes) and then to The Valley for the Cox Plate, where he will seek to complete the Underwood-Cox Plate double achieved this century by Northerly, So You Think, and Ocean Park.

The TAB are so confident that Zaaki just needs to turn up to win the Plate that they have already paid out punters who have backed him pre-post for Australia’s greatest weight for age race.

Williams will be doing his utmost to heep the partnership intact and suggests that Zaaki is up with the best weight for age gallopers he has partnered – and Williams, with 66 group 1 victories to his name, has ridden plenty. 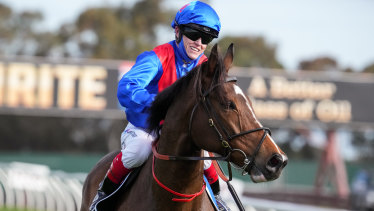 Craig Williams was all smiles aboard Zaaki in the mounting yard after the Underwood Stakes.Credit:Racing Photos

“I just love the preparation, the planning that Annabel has got for Zaaki,” Williams said.

“I would say after his gallop and today that Annabel has got this horse right where she wants him for his main target.

“Oh, he’s good…he pumps his chest up and the jockey gets on when it comes to raceday and he’s a real racehorse.”

He goes by the name of Elephant and it might just be time to start trumpeting his reputation rather more loudly after the Kiwi raider made it two wins from three Australian starts with a comfortable triumph in the group 3 Sandown Stakes under top jockey Damian Lane.

In winning from Romancer and Harbour Views, both more than useful gallopers, the Emma-Lee and David Browne-trained gelding staked his claim for group 1 glory in the Toorak Handicap, one of the Caulfield Cup carnival’s most historic races.

The son of Shocking has shown steady improvement since making his debut in a New Zealand maiden in March 2020, rewarding his connections’ patience as they steadily brought him through the grades.

He was narrowly touched off in the Feehan Stakes by Superstorm when he was stepped up in class, and he showed he had taken plenty of benefit from that effort on Saturday – in the process bringing a glowing report from Lane.

“He’s still a raw horse. He’s taken benefit from his two runs and he’s starting to put it together. “Today he was still a little unsure in putting the race away and pricked his ears on the line.

“He’s a horse who is learning and he’s certainly going about it the right way. He cruised to a point, and then it was crunchtime and he had to knuckle down with a bit of weight on his back. I thought he was really good.

His NZ trainer David Browne admitted to nerves before they jumped, but any fears he held were unjustified.

“That was pretty strong,” he said.

“I think there is a bit more improvement in him yet. He’s strengthened up a bit and his coat has got a bit to go still.

“In all his races, if you look at them, in the last bit he always finds a bit more and lengthens out really well.”

Former UK galloper Floating Artist stamped himself as a stayer of real promise for the Ciaron Maher/David Eustace combination with an easy win in the 1800-metre Big Screen Company Handicap in the hands of leading young rider Teo Nugent.

The son of Nathaniel won over 2400 metres as a three-year-old in England and will undoubtedly be suited by a step up in trip in Australia. But the gelding, who was landing a hat-trick in this race, will not be rushed in this preparation.

“He’s a progressive horse and the bar keeps getting raised and he keeps delivering,” said Eustace.

“He was impressive today.

“Teo is doing a really good job on him as well…something like the Coongy and the Ballarat Cup at the end of the carnival will be a nice race to target.”

Trainer Archie Alexander has never had a horse with the turn of foot possessed by Chaillot, and the mare came from the clouds to get up in the last strides to win the listed Testa Rossa Stakes under a daring Declan Bates ride. It was an appropriate victory, as the five-year-old is by the stallion for whom the race was named.

Related posts:
Previous Post: Grand final prognostications and Norm Smith Medal predictions
Next Post: What happened to Van Gaal’s Man Utd No.2 who claimed he was "fully in charge"