New Zealand kept their semi-final hopes alive after beating Bangladesh in a low-scoring thriller at the Women’s T20 World Cup in Melbourne.

Bangladesh, who had never played New Zealand in women’s international cricket, looked capable of a shock upset when they bowled the Kiwis out for 91 with 10 balls to spare.

But tight bowling restricted the Tigers who were eventually skittled for 74.

The victors of that trans-Tasman tie – effectively a quarter-final – will make the semi-finals along with India, who have already booked their place in the last four, and will win Group A if they avoid defeat against Sri Lanka in Saturday’s later game (04:00 GMT).

Bangladesh are eliminated from semi-final contention, along with Sri Lanka who they meet on Monday. 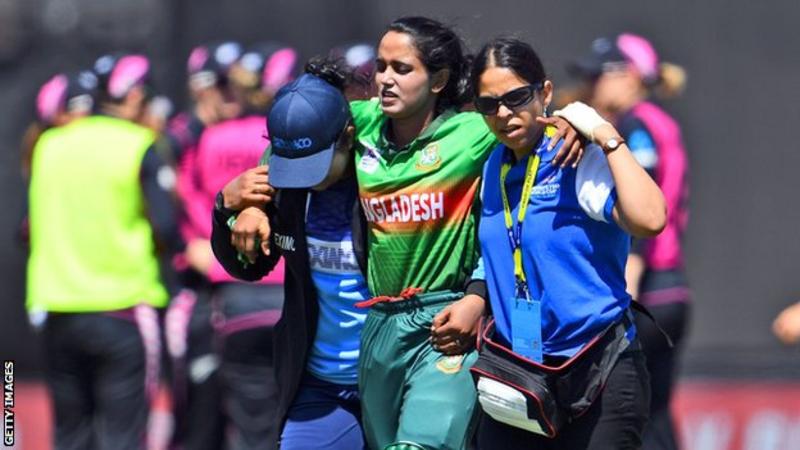 Bangladesh had made four changes for this game, the maximum possible within a 15-strong squad, and they looked to have paid off as seamer Ritu Moni, playing her first game of the tournament, ran through New Zealand’s middle order, taking 4-10.

Captain Salma Khatun (3-7) had earlier removed both openers as the Tigers hunted for an unlikely win at Junction Oval which would have had hosts Australia looking on with interest.

In reply, Bangladesh were 31-2 when keeper Nigar Sultana Joty was hit on the helmet while sweeping spinner Anna Peterson, and had to be helped from the field – and that seemed to knock the stuffing out of Bangladesh.

Galvanised, the White Ferns spinners put the squeeze on as four wickets fell for eight runs in the second half of the innings, while medium-pacer Hayley Jensen took a miserly 3-11 from four overs.

It was a surprise when Joty bravely returned at the fall of the eighth wicket, with 35 needed from 20 balls at that stage, but she was one of only three players to reach double figures – top-scoring with 21 before being last out, caught in the deep off the penultimate ball of the innings.