England all-rounder Chris Woakes set to end ‘nightmare’ year by returning for fourth Test against India, with Ollie Pope or Dan Lawrence to replace Jos Buttler as Jonny Bairstow gets the gloves back

Chris Woakes is ready to emerge from his ‘nightmare’ 2021 and return to the England side for Thursday’s fourth Test against India.

Woakes has not played a Test for a year because of setbacks including being forced into isolation in Sri Lanka after sharing a taxi with Covid-positive Moeen Ali and injuries culminating with a bruised heel caused by slipping down stairs at home.

Now England’s player of the year for 2020 is back in the 15-man squad, and as long as he comes through two days of training at the Oval, is likely to replace Sam Curran.

‘It’s been an absolute nightmare for him,’ said England captain Joe Root of Woakes. ‘Whether it’s being a close Covid contact or getting a freak injury coming down the stairs, he hasn’t been able to play a huge amount of cricket.

‘But when he has played he’s been as good as ever and to have him around again has been great. It can only put us in a really strong position going into this game and the back end of the series.’

England also face the dilemma of whether to rest the evergreen Jimmy Anderson or in-form Ollie Robinson, and replace one of them with the fit-again Mark Wood, with the final Test quickly following at Old Trafford. 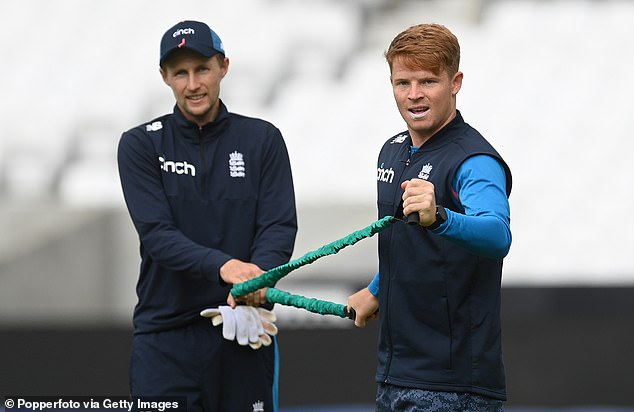 ‘It’s really important we see where everyone is at,’ said Root. ‘It’s such a tricky balancing act. We’ve had to deal with so many injuries and trying to manage workloads alongside performance is difficult.’

England will also decide whether Ollie Pope or Dan Lawrence — who on Tuesday made 34 for Essex in their County Championship match against Glamorgan — fills the batting place vacated by Jos Buttler, who is on paternity leave. Jonny Bairstow will take back the gloves.

‘They are two wonderful players who offer a huge amount to English cricket,’ added Root on Pope and Lawrence. ‘It’s one to be mulled over.’