Playing for Cuckfield against Middleton-on-Sea in July 2015, Chase was trapped leg-before first ball as Archer single-handedly reduced his opponents to eight for five. Archer then limped off with an injury, allowing Cuckfield to recover to 265 for eight. They ended up winning by 100 runs.

‘He always had some pace, but he wasn’t as rapid as he is now,’ said Chase. ‘He pulled up after the five wickets, and batting became so much easier for us.’

This summer, Chase is hoping to inflict some damage with the ball himself, after running through England in Barbados in January 2019 to the tune of eight for 60.

That analysis was all the more eye-catching because he didn’t pick up another wicket in a series West Indies eventually won 2-1 to reclaim the Wisden Trophy. Indeed, his 51 other Test victims have cost 47 apiece.

‘It’s a wonderful memory,’ he said. ‘It’s good to look back on it going into this series. Surely England will remember it too and have something to think about in the back of their minds. 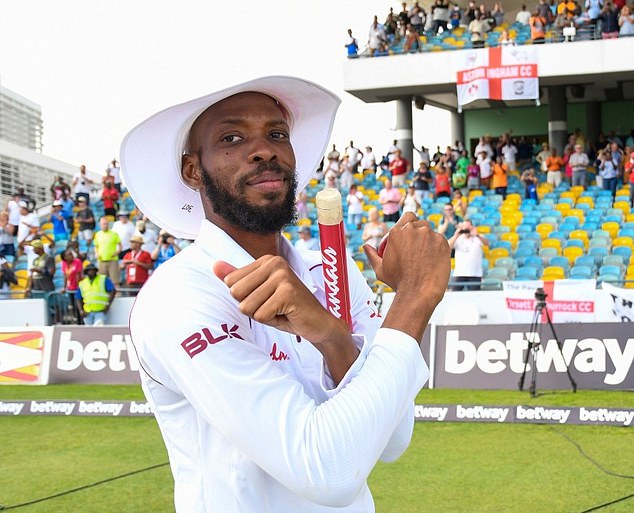 ‘My lines and lengths and variation were spot on. I don’t want to say the England batsmen underestimated me, but they were a bit complacent in playing me. As the series went on, they really tried to knuckle down and cope with my bowling, and they did a good job.’

Chase believes he will be West Indies’ second-choice spinner in the ‘biosecure’ three-Test series starting in Southampton on July 8, behind the hulking figure of Rahkeem Cornwall.

But Chase’s middle-order batting means he will form an integral part of the tourists’ attempt to win their first series in England since 1988. He scored the most recent of his five Test hundreds in St Lucia last February, in a game Joe Root’s team won to narrow the margin of their series defeat, and now wants to add a century on English soil to his CV.

‘Once you do well in England, your stock as a cricketer goes up on the international scene,’ he said. ‘People take you more seriously.’

Related posts:
Previous Post: Barcelona star Ansu Fati has 'no interest in leaving the Nou Camp'
Next Post: DANNY MURPHY: Fernandes is too good a player to be involved in diving