Cricket’s longest season creeps into October on Friday with Warwickshire poised to complete a domestic red-ball double and Lancashire desperate for their suffering to end.

Only Lancashire’s attempt to avoid their heaviest ever first-class defeat remains a motivation at an autumnal Lord’s, with this supposed showpiece bringing a packed and troubled domestic campaign to an emphatically one-sided and low-key end.

In truth it has proved a match too many and an anti-climax following the thrilling end to the County Championship last week that saw Warwickshire edge out Lancashire for the title by beating Somerset in the last session of the last day.

Lancashire were never in with a chance of a consolation victory once they were bundled out for 78 on day one and there was an inevitability about their fate as they tried to get close to the 440 needed to make the champions bat again.

When bad light and drizzle brought a premature end to day three Lancashire had made 171 of them but had lost six wickets, two self-inflicted when Alex Davies ran himself out and Steven Croft walked off for a slip catch without touching the ball.

The Red Rose county now need another 50 runs to avoid the worst defeat in their long and proud history – against West Indies in 1950 – and another 70 to avert their heaviest against another county, Yorkshire in 1938.

There are no such concerns for a Warwickshire side who have exceeded all red-ball expectations this season after being galvanised by a new coach in Mark Robinson who was shrewdly appointed this year by director of cricket Paul Farbrace. 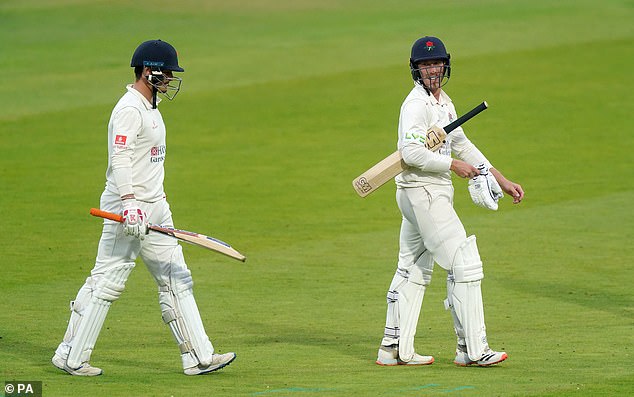 It was a player recruited before both arrived at Edgbaston in Liam Norwell, signed from Gloucestershire at the end of 2018, who stood out by taking two key wickets to take him above 50 for the season after Warwickshire had finally been dismissed for 518.

‘No-one gave us a chance to be in this position at the start of the year so there are a lot of smiles in the dressing room,’ said Norwell, a candidate for this winter’s Lions tour to Australia. ‘It’s been a great combined bowling effort and that’s why we are where we are.’

Norwell produced the ball of the day to bowl 20-year-old George Balderson, who had provided the only real Lancastrian resistance with 65 on not only his first visit to Lord’s but also the capital. ‘Somehow I’ve got to the age of nearly 21 without ever being to London,’ he said afterwards. There will be plenty more trips to the home of cricket if he continues batting like this.