Watching David Warner flail about in the Middle East, with all the positive attitude and nil effect of a US peace envoy, has been to contemplate the question Australian cricket really, really doesn’t want to face.

While there has been much angst about finding Warner an opening partner for the Ashes series starting in one month, that search is emerging as a distraction from the real issue. At 35 years of age, is Warner himself cooked? Is his next partner going to find himself sitting next to an empty place card?

Against Bangladesh on Thursday, Warner was batting much as he has for the past six weeks of Twenty20 cricket, finding every part of the blade except the middle. When he tried to score a single, the only thing he found was the fielder. When he tried to bash his way out of trouble, at best he found some part of the grass he wasn’t aiming for. At a World Cup that has generally called time on the old guard – hello and goodbye, West Indies – Warner has looked like a cricketer who went on one tour too many.

Like anyone, Warner has had temporary ruts through his career, but this one has been going on for longer than it is comfortable to admit. Last month, he was dropped by his Indian Premier League franchise, the Hyderabad Sunrisers, after two runs in two innings. For Australia, his scores have been 0, 1, 14, a promising 65 against Sri Lanka, an ominously flat-footed 1 against England, and a scratched-out 18 against Bangladesh. His previous cricket was some IPL early in the year.

But this is only T20, right? Warner’s strongest format has, notwithstanding perceptions, always been Test cricket. His record places him near the top of the pile for Australian Test openers: 7311 runs in 86 matches, an average of 48.09 which goes up to 63.20 in Australia. He might have been packaged as a Kaboom Kid, but a decade ago he outgrew that, and he holds a place on the Matthew Hayden-Arthur Morris-Bill Lawry shelf, the topmost in Australian Test history for those who face the new ball.

David Warner is bowled by Shoriful Islam on Thursday.Credit:Getty

Warner’s immediate problem is he shouldn’t be in the Middle East at all. If the Ashes were the main focus, he should be turning out for NSW against Victoria in the Sheffield Shield, re-learning how to bat against the red Kookaburra. He might yet regain rhythm in the T20 World Cup, but with Australia almost certain to make the semi-finals, he will be stuck there until just before the Ashes, with precious little red-ball preparation before the first Test starts on December 8. The indefinite postponement of the Test against Afghanistan hurts Australia’s Ashes preparation. Players coming back from the World Cup will have a fortnight to readjust from a year without Test or first-class cricket.

Today’s cricketer is often able to make this readjustment. It is one of their special talents. For Warner, however, more than any of his teammates, long-form cricket is already a distant memory. He spent most of last summer sidelined due to injury before being recalled prematurely, by selectors as desperate then as they are now, for the end of the Test series Australia lost to India. After that, there was a little bit of Sheffield Shield and then a long break. Warner has not batted for more than two hours, in a serious cricket fixture, since January 2020.

There is being out of practice, and there is being unable to remember. In youth, the former can be overcome. With age, the latter becomes more the issue. And you don’t know that you’ve passed from the former to the latter until it has already happened. 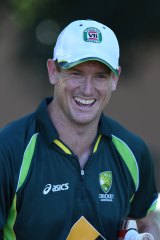 Chairman of selectors George Bailey faces a tough question on David Warner before the Ashes.Credit:Brendan Esposito

With Warner, all discussions bubble along over the top of some juicy subtext. Here is poor George Bailey, chairman of selectors, tossing and turning at night over the thought of Marcus Harris, Usman Khawaja or Joe Burns partnering Warner. Will Pucovski is unavailable. But then – the chairman sits bolt upright in terror – what if he can’t get any runs out of Warner himself? Can Bailey, a former teammate several branches lower than Warner on cricket’s status tree, bring himself to make that call? Often you lose sleep over one thing, only to get up in the morning to discover you should have been losing it over another.

Since the ball-tampering affair, it has been hard to escape the suspicion that Warner has something of a protected status. He took his punishment as the designated villain, and, like a true goodfella, said nothing. Yet his own agent has insinuated that Warner knew a lot more than he revealed, and could still tip the bucket on a broader conspiracy if Australian cricket does not treat him kindly. Whether or not the murmurs have substance, there are colourings of emotional blackmail beneath this. Warner’s only request is that he be given the freedom to bow out on his own terms. But that is conditional upon his run-scoring, and apart from a dominant home summer against Pakistan and New Zealand in 2019-20, ever since Sandpapergate Warner has not been the player he was: 95 runs in five Ashes Tests in 2019, 67 runs in two matches in 2021. It is hardly a return that gives him the authority to dictate his timetable.

The kindest thing Bailey could do is bring Warner home now. A few good whacks in the remaining T20 matches provides as little assurance for the Ashes as do England’s T20 performances. I say this as an unabashed fan. Ever since his mature 132 to bat through the innings against New Zealand in his second Test in 2011, Warner’s batting has been a highlight for a watcher of Australian cricket, and because of his polarising personality, his achievements as a Test opener will always be a little underrated.

Of course, what tends to happen – and given my peerless record for forecasting a future that doesn’t take place – is that Warner transforms himself into the hero of Australia’s World Cup campaign, rides the momentum home, and on the weight of zero matches, he does to England’s bowlers what he did in 2013 and 2017 (rather than them doing to him what they did in 2015 and 2019). Never write off a champion!

The speech when accepting the Brisbane player-of-the-match gold goblets is already written. However, like most of the present Ashes forecasting, and like Warner’s current T20 efforts, this is mostly just hit and hope.