Thanks, India. Thanks a lot. What else can you say?

Indian players celebrate after defeating Australia by three wickets on the final day of the fourth Test.Credit:AP

When Washington Sundar, a 21-year-old stripling on Test debut, hooks the best Australian fast bowler of his generation for six to give this match and series its final wrench, what other can you say?

When an Indian team that was sat on unceremoniously its backside in Adelaide a month ago and gutted by injury since inflicts Australia’s first defeat at the Gabba since 1988, what more can you say? Fortress Gabba fell to a Trojan horse. It had looked like such a gift.

Thanks Shubman Gill for your jaunty 91 that made this impossible result possible. Thanks Rishabh Pant, for your 89 not out that made it certain, and to think that we once had you pegged as Tim Paine’s babysitter. It was Paine senior who needed bit of rocking in the cradle at the end of this day. 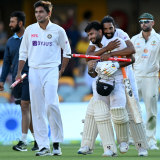 Thank you, Cheteshwar Pujara, who bodily absorbed all that Australia could throw at you and in the process wore them out so that they had only lollipops to offer with the new ball in the last hour. The ball was new, but the bowlers were worn. They had punched themselves on Pujara.

Thank you Shardul Thakur and Washington Sundar and Mohammed Siraj and Navdeep Saini and T Natarajan and all those who fell along the way, too; space does not permit a listing. It’s nice meeting you. No, really! You widened our eyes, and brought tears to them.

About this Indian team, it can truly be said that nothing changed from first Test to fourth except nearly all the names and the results. Never before can such a callow team have played such knowing cricket away from home. Never has one pulled off a feat like this.

We mightn’t be thanking you in five years when you're still whisking away matches from under our noses, but thanks for now, and take a bow. By series end, few Australians would have begrudged you whatever spoils you took home.

Thanks for your forbearance in your bubbles. Thanks for rolling with the punches of an ever changing schedule. We know it wore thin after a while on both sides, but you stuck it out. Perhaps you could email your field notes to a few tennis players we could name.

Thanks Ajinkya Rahane for that smile. It embodied the spirit of the series. The commentary boxes were reverberating all day with rasping calls for nastiness and aggression from Australia, and Rahane just smiled. And won.

The last day was a precis of all in the series after the first Test. Every time India looked like they were beaten, they hit back harder than they were hit. India rode their luck, but it was luck of their own making. The first stroke this day was the pitch. A night under covers and a little rolling knitted the pitch back together, and so we had a stage instead of a burial ground. Of the fourth day's variable bounce, there was no sign.

Of the Gill-Pujara partnership that gave this day its direction and momentum, it’s as simple as this: Gill hit, Pujara got hit. Gill’s youthful fearlessness put back on the agenda the least possible result at day’s beginning, an Indian win.

Pujara set in, like winter. He was struck 11 times, in head, ribs and hands, and they all hurt, but he was also the fulcrum. At last he was lbw to the second delivery with the second new ball, Cummins’ in-ducker. That would have hurt Pujara more than any number of hits in the head. But his legacy lingered at the crease: the Australian bowlers were nearly spent.

The rest played around Pujara, and then the ever impudent Pant played around the rest. One moment characterised him, and this whole series. It was when a ragging Nathan Lyon delivery beat him by so far it went to slip. Fazed? The next ball he clouted for six against the spin. Thank you.

For Australia, this was lightning striking twice in a similar place, but with even more of a jolt. In the Ashes, Ben Stokes was a one-day wonder, put right in the next match. This was a six-week, four-match wonder, and there is no next week.

Paine will feel it more keenly than most. Apart from missing a chance to stump Pant from a ball that made a dastardly jump, he did nothing egregiously wrong. But nor was there a masterstroke. In England, he conjured up the healing. Now he needs a miracle cure. He has shrugged off doubts about doubling up as 'keeper and captain, but they're turning into convictions against him.

In a way, he also personifies the series. In the first Test, he was man-of-the-match. In the last week, he has become a wanted man.

Australia will face questions after failing twice in a week to bowl out India on the last day. Why did Cam Green not bowl more? Why did Marnus Labuschagne not bowl earlier (he began this match with more Test wickets than the entire Indian attack)?

Let’s just say there’s remedial work to be done before South Africa (assuming there is a South Africa). If there was a fifth Test, it’s hard to imagine Mitch Starc would play it. He is like a piece of high-end machinery, purring at his best, but constantly in need of tuning. Back to the workshop he goes.

Nathan Lyon lacked penetration and results, though the hullabaloo about his 100th Test disguised this. He’s 33 and Australia would want to be grooming a successor. As for the batting, situations remain vacant.

We could plunge immediately into a national bout of self-mortification and the royal commission that is bound to follow. But that would be to steal from India its rightful glory. So for now, let's be thankful for the small mercies. Thankful for Green and Will Pucovski for the glimpse of the future. Now let’s be patient.

And thankful to and for Pat Cummins. Now can we clone him?

Thanks to the curators for four good cricket pitches rather than roads. It reinforces the idea that cricket is a better game when ball is shading bat. It makes the runs more meaningful. Both teams dropped fistfuls of catches, but perhaps that’s because so many were generated.

Thank you all. We could have done without that. But even more, we needed it.