Terry Henderson says his Irish-trained stayers True Self and Downdraft will definitely be coming to Australia for this year's Melbourne Cup.

But the OTI Racing boss said he wouldn't hypothesise on how the current coronavirus restrictions could impact on their trainers Willie Mullins and Joseph O'Brien in the spring.

True Self shapes as a Cups contender after her maiden Australian campaign produced a second to Prince Of Arran in the Geelong Cup before a win in the group 3 Queen Elizabeth on Stakes Day.

OTI Racing leased the staying mare last campaign but has since bought a 50 per cent share in her, in their quest to win Australia's greatest race.

Meanwhile, Downdraft, who OTI Racing owns outright, has been gelded after winning the Lexus and then running 22nd in the Melbourne Cup last spring.

"I think they're both serious horses if they come back sound," Henderson said.

"The gelding of Downdraft will be a real positive because Joseph thought there's probably another five or six pounds in that horse and that might just make a difference to being competitive in the Cup.

"They're both primarily set for the journey back to Melbourne.

"Both of them will hopefully have two runs in Europe before they come back for the Cup [this] year."

OTI Racing will be represented by five runners this weekend including last start winners Night's Watch, in the group 1 Doncaster, and Quick Thinker in the ATC Derby. 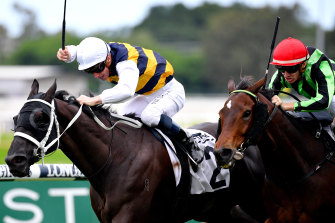 James McDonald had to work harder on Night’s Watch in the Neville Sellwood.Credit:AAP

"The top of the market is there, three very good horses, two in particular [Castelvecchio and Shadow Hero].

"We have now got the group 2 under the belt and it would be fantastic for him to be competitive, which I think he's got a real chance of being on the wet track."

"He'll need as much luck as he had last week twice over," he said.

"He starts slowly, he gives them all a chance. He got away with it last week with a great ride by James [McDonald] but the Doncaster is another kettle of fish and we'll just need a lot of luck to be competitive in it."

OTI Racing will also be represented at Randwick by Gallic Chieftain, en route to a Sydney Cup, and Inverloch at Caulfield.

"Trent [Busuttin] and Natalie [Young] have done a remarkable job with him," Henderson said of the Mornington Cup runner-up. 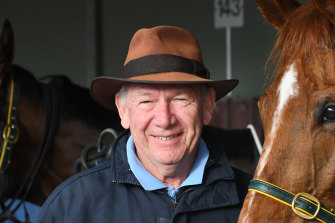 "He had a tendon injury about 18 months ago, we went through all the rehab and he came back and he's done remarkably well.

"He's only 3kg above the minimum once young [Thomas] Stockdale jumps on him, so that helps him a lot, and the way Stockdale is riding, the 3kg [claim] is a luxury I think."

While Atkau earned a ticket into the Caulfield Cup in beating Inverloch last start, Henderson was not getting carried away with a Cups dream for his son of Fastnet Rock.

"Reality is and history has shown it's extremely difficult to take horses out of the autumn at this stage and have them ready for the spring and be competitive with the internationals around," he said.

"But having said that, those horses are not beating the local horses anyway. It [the Cups] is a lovely ambition to have and it's terrific to win these races that qualify you through but reality is it's hard to come back and win in the spring with the competition."

Henderson said Benitoite, who also runs at Caulfield on Saturday, was being aimed towards the 2000-metre VOBIS race later this month.