Once upon a time Justin Langer and David Boon were teammates for Australia.

That association was a distant memory at Manuka Oval on Friday night, however, as the Australia coach clashed with Boon, the match referee, over an Indian concussion substitution during the first match of the Twenty20 series.

Teams are permitted to make a like-for-like substitution if a player is concussed but the Australians questioned whether Chahal as a bowler should have subbed in for all-rounder Jadeja. All-rounder Moises Henriques said Australia were not suggesting Jadeja's leg issue had contributed to him being ruled out.

"One is an all-rounder and a gun fielder and the other one is an out and out bowler who bats 11," said Henriques.

"It's nothing to do with his hammy. I guess I’d like to look into that as a like-for-like decision so to speak because we’ve already seen one half of how Jadeja can be, how well he can bat.

The fact Jadeja was not assessed straight after being hit did not contravene ICC concussion sub rules, which were brought in ahead of last year's Ashes and first put into action when Steve Smith was struck by Jofra Archer at Lord's and replaced by Marnus Labuschagne.

The guidelines state that a team doctor or physio should run on for an on-field assessment "if called on by the umpire; if a player is down and players are calling for assistance; immediately, if there is a head knock and the player is unable to resume after three to four seconds; if a player calls for a new helmet following a head injury; and; at the end of the over, if the player resumes play." Only the final reason applied to Jadeja but as he was hit in the last over, he walked off after it rather than a doctor running on. 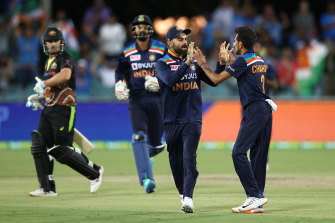 Australian captain Aaron Finch trudges off as Virat Kohli congratulates Yuzvendra Chahal for the first of his three wickets.Credit:Getty

"He was a bit dizzy, he still is," India captain Virat Kohli said. "Concussion replacements … today it worked for us, maybe another time we wouldn't have found a like for like. Chahal came in and bowled really well."

Already annoyed, Langer's mood was not improved when Chahal removed Finch for 35 from 26 in his first over and then Smith in his next, the dismissals completed by superb catches from Hardik Pandya and Sanju Samson respectively. To make it worse, Finch batted in discomfort after hurting his hip in the field.

"It progressively got worse throughout the game. I’m sure I’ll have the scan tomorrow and see how we go," Finch said.

D'Arcy Short, standing in for the injured David Warner, was given a life on 18 when Kohli spilled a regulation high catch but his 34 from 38 did not get Australia rolling and while Henriques added 30 from 20 they wound up 7-150, short of India's 7-161, before a crowd of 5835.

Amid defeat there was at least a career highlight for leg-spinner Mitchell Swepson, who with Ashton Agar sidelined with a calf strain had been driven down the Hume Highway from Sydney to join the team and was rewarded with the wicket of Kohli when the India captain shanked a return catch to him.

That was before Jadeja's expansive and later controversial cameo.

Related posts:
Previous Post: Kei Nishikori gives the thumbs up after elbow surgery and testing positive for coronavirus
Next Post: Liverpool and Arsenal in January transfer battle for Brighton star