The Adelaide Strikers will face the Perth Scorchers in the 2021-22 WBBL final after crushing the Melbourne Renegades by nine wickets in their “challenger” final at Adelaide Oval on Thursday night.

Strikers captain Tahlia McGrath elected to bowl after winning the toss and that decision proved a masterstroke as she and her bowling teammates produced a sensational performance to restrict the higher-ranked Renegades to just 8-83 – their fourth-worst score.

Dane Van Niekerk hits out for the Adelaide Strikers in their win over the Renegades.Credit:Getty Images

Megan Schutt (2-23 off four overs, and 11 dot balls) set the tone when she bowled Josie Dooley with the first ball of the match, courtesy of a spectacular in-swinger that went through the gate and cannoned into middle stump.

Darcie Brown (2-9 off four), McGrath (1-12 off four) and Amanda-Jade Wellington (1-21 off four) then led the charge, combining for 41 dot balls and ensuring the pressure was relentless for the remainder of Melbourne’s innings.

Twenty-four hours after taking a WBBL record 5-8, Wellington became the season’s leading wicket-taker (22) with one game to go.

In response to the Renegades’ paltry total, the Strikers cruised to 1-86 after just 10.5 overs, with Dane van Niekerk (43 off 30 balls) and Katie Mack (31 not out off 29) leading the way to not only their biggest-ever win (by wickets), but also the biggest finals victory by any team in WBBL history.

But van Niekerk sent a scare through the Strikers’ camp when she was hit on her left hand after mistiming a reverse sweep, and will be sent for a precautionary scan despite continuing to bat after receiving some medical attention on the field. 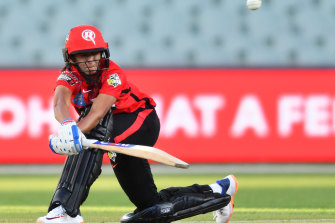 Harmanpreet Kaur plays a shot for the Melbourne Renegades.Credit:Getty Images

Fresh from belatedly avenging their loss to Brisbane in the 2019-20 final, by smashing the Heat in the “eliminator” final on Wednesday night, the in-form Adelaide will now get their shot at redemption on Saturday evening in this year’s decider.

The Scorchers, too, will be chasing their maiden championship, hoping it will be a case of third time lucky after back-to-back defeats in the 2016-17 and 2017-18 finals.

The Strikers took full advantage of COVID-related fixture disruptions, which saw them play Melbourne in Adelaide despite finishing lower on the table, recording a whopping 68 dot balls to put the brakes on the Renegades’ innings.

Melbourne’s opening partnerships had been an issue all season, averaging just 28 a game heading into Thursday night, and that may have been the reason why they opted to pair Jemimah Rodrigues with Dooley instead of Rodrigues’ usual top-order partner Eve Jones. 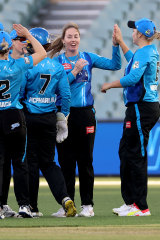 But the decision backfired immediately when Dooley was sent packing for a royal duck, as did the call to play injured captain Sophie Molineux (foot) who was unable to bat and was smashed for 0-22 off two – a shadow of the bowler who had the third-best economy rate (minimum 35 overs bowled) in the competition prior to this clash.

In the eighth over, the writing was on the wall for Melbourne when McGrath trapped player of the tournament Harmanpreet Kaur lbw for just seven. The Renegades knew it wasn’t their night two balls later when Courtney Webb was run out for a diamond duck after Jones smashed the ball into Wellington’s fingers before hitting the stumps at the bowler’s end with Webb short of her crease, reducing Melbourne to 6-30.

The Strikers could do no wrong as evidenced by Sarah Coyte misfielding at extra cover in the 12th over but still managing to gather the ball and run out Jones (14 off 21) with a spectacular direct hit.