India’s spinners wasted no time in steamrolling through New Zealand’s remaining batters on Monday to thrash the tourists by a record 372 runs in the second Test at the Wankhede Stadium in Mumbai and claim the series 1-0.

It was the biggest margin of victory, by runs, for India in a home match, eclipsing their 337-run win against South Africa in Delhi 2015.

Ravi Ashwin shares a lighter moment with Virat Kohli as India destroyed New Zealand in the second Test in Mumbai.Credit:AP

Spin-bowling all-rounder Jayant Yadav did most of the damage on the fourth morning, picking up 4-49 to rip through New Zealand’s middle and lower order.

Ravichandran Ashwin took the final wicket to finish with 4-34 as New Zealand were all out for just 167 in their second innings, chasing 540 for victory. 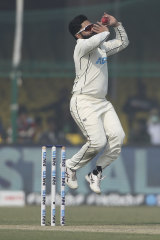 It took India just 43 minutes in the first session of day four to wrap up the win after New Zealand had resumed on 5-140.

India set the tone for their domination with the bat, with Mayank Agarwal top-scoring with 150 in the first innings to lead the home side to 325.

And New Zealand’s fate was sealed with a shock capitulation in their first innings reply – skittled for a meagre 62 as Ashwin claimed 4-8 from just eight overs.

The result completely overshadowed the remarkable 10-119 Mumbai-born New Zealand left-arm orthodox spinner Ajaz Patel recorded in a shade under 48 overs in India’s first innings. He went on to claim 4-106 in the second innings as India declared on 7-276.

The first test in Kanpur ended in a draw.