England have played poorly and made some bad decisions this Ashes series, but the rot set in long before the first ball was bowled at the Gabba. Here are the six key mistakes England made that have led them to the brink of a series defeat after just two Tests.

Rotating players in India. The decline started in India in February after England won in Chennai. England opted to put Twenty20 cricket ahead of Test cricket when they started resting players and rotating them for the rest of that series. That moment sent a message to me they were not focusing on the Test team.

The T20 team did not need any more love. Test cricket has been the format over the past few years that has needed more attention.

It got worse in the northern hemisphere summer when players were allowed to put the Indian Premier League ahead of a Test series against New Zealand. Yes, I know that series was not part of the future tours program but, wow, England players were told they could play in the IPL when there was a Test match going on at Lord’s. It was an odd way to build towards the Ashes.

Not showing love to Leach. Jack Leach did not bowl a ball for the whole summer. A finger spinner needs loving, needs games. A finger spinner is not going to worry the opposition, so you have to give them belief and confidence. As a captain and coach, you have to work out angles and ways of keeping him in your attack and then hope that over time, by playing him more and more, he gets better and better, more experienced.

Now every time Leach has the ball in his hand he must think the management does not rate him. Then the first time he is called upon, he plays on a green top in Brisbane on the back of his batting unit making 147. No chance.

Poor judgment and data obsession. The selection for the first Test in Brisbane was poor and then for the second Test, when England knew it was going to be roasting hot, they did not pick a spinner or anyone who could inject pace.

This has happened before – go back to the day-nighter in India, where England picked three seamers on a dust bowl – but overall the thinking this year has been as bad as I can remember.

England can make excuses and say they have been unlucky here and there, and Ben Stokes was not around the team in the summer, but unless they are honest with themselves and admit they have made some big mistakes, they are not going to move forward.

They have been going on data and information rather than playing in the here and now. For example, Stuart Broad should have played in Brisbane. To not pick him to bowl the first ball to David Warner from around the wicket was blatant stupidity.

For too long this England team has been predictable. You know there will be a partnership but then they will lose two or three in one go. That has been the case with the Test team for some time against the better sides.

A cosy leadership group. This tour has been a reality check. England have not taken catches or scored enough runs because they are not good enough. There are no “what-ifs”. They have to understand a lot has gone wrong. They are playing against a better team but should not be getting hammered the way they have been in the first two Tests. You want them to compete over a whole match, not just win a couple of sessions.

Ashes series are always a line in the sand for a team. There will be lots of questions about the leadership. Is it too comfortable? All I will ask is who is the one behind the scenes who steams into the players and says, “this is not good enough”?

So far batting, bowling, fielding, mentality and selection have been poor. The biggest frustration for me is we have seen this coming for a long time but the England team was blind to it. The batting has embarrassed Joe Root as captain. He is making decisions and gambling in every Test match because he does not know how many runs they will make.

I feel for him in a way. To be a good Test team, 10 of the side should pick themselves unless you have injuries. But England are always talking about changes, which is a sign they are struggling.

Look at Australia. They have already named their squad for the rest of the series and you know who is going to play. That four-man attack, if all fit, will play. England would love to be able to do that.

Failing to blood Mahmood. Look at the decision at Headingley in the northern hemisphere summer, when England picked Craig Overton over Saqib Mahmood. Mahmood is exactly what you want in Test cricket. He has a bit of pace and can move it both ways, but we opted for a straightforward, sensible seam bowler in Overton instead. 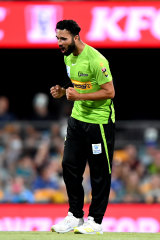 Saqib Mahmood is currently playing for the Sydney Thunder.Credit:Getty

OK, it was a Headingley pitch that suited him, but you just know that kind of bowler is going to struggle around the world when not in English conditions and using the Dukes ball. It was a chance to look at Mahmood, who was the most exciting cricketer to emerge this year. Instead, England learnt nothing about him with a red ball and they backed themselves into a corner by saying they would not give players debuts in an Ashes.

If England lose in Melbourne, it is time to make big changes. Get Mahmood in. If England are 3-0 down and he does not play one or both of the last two Tests, I will be very disappointed. They will have to make changes and give chances to new players.

Sticking to a failing county system. Five of the past six Ashes tours have followed the same pattern, with one exception in 2010-11.

We talk about the same issues yet nobody does anything about it in England. I have said it before many times but until we change the Dukes ball to the Kookaburra in County Championship cricket and force batters to bat longer, and bowlers to work harder for their wickets, we will be in this situation again in four years.

England keep doing the same things, so why expect a different result? The Aussies will still have Steve Smith and Marnus Labuschagne in four years. Cameron Green will be a lot better and Nathan Lyon will probably still be going so we have to rebuild from the bottom up.

We also have to be honest about our home performances. In 2019 it was 2-2 but Australia battered us really. It took the greatest Test innings of all time by Stokes to get England back in the series. It was one man. That was in our own conditions as well.

Sometimes you say do not panic or be too harsh. It cannot be easy living in bubbles, but the reality is we need to look at our system and say it is time to panic for the England team.

We have been dictated to by better teams – New Zealand and India in our own backyard, and now Australia. It will not be an easy or quick fix. It will probably get worse before it gets better, because Broad and James Anderson will go soon. But we need to rebuild and go again.