Mark Newnham has always been confident Shadow Hero was the best horse he has trained and believes the three-year-old triple crown isn’t beyond him after a surging Randwick Guineas victory on Saturday.

Newnham said Shadow Hero, which is now a two-time group 1 winner, is only going to get better as he stretches out to 2000m and 2400m in the Rosehill Guineas and Australian Derby.

“I have thought he was really good horse since I put a saddle on him,” Newnham said. “It has been a real team effort with Josh [Parr].

"He produces a group 1 ride like that when it really counted. He made all the right decisions, it was 10 out of 10. When the pressure went on, he was in the right spot and had the right horse."

Newnham said Shadow Hero had always reminded him of his sire, Pierro.

“There is a bit of dad about him, but he has always been very strong," Newnham said. “He is that sort of horse, he just needs to get the room and he has that sort of sprint at the end of a mile.

“I always thought he was going to be the strongest horse today and he was. We aren’t going to change our plans with him and he is only going to be better in the Rosehill Guineas, and I’m confident about him staying in the Derby.” 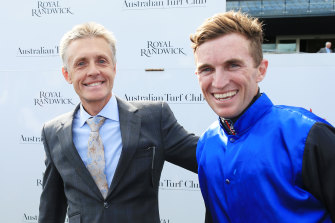 Parr followed the script he and Newnham had worked out before the race. He got close to the fence before sneaking into the race from the top of the straight.

Shadow Hero ($6) had the acceleration when a run between Brandenburg ($4.80) and Microphone ($4.60) appeared and powered to victory. He scored by three-quarters of a lengths from Microphone, with Brandenburg a nose away in third.

"I knew I had the horse there to be in the finish at the top of the straight," Parr said.

"I knew Brandenburg would drift left, which he often does under pressure, so I was confident of obtaining clear air.

"When I really got out after him, his response was really good and we've seen now in the Spring Champion and now the Randwick Guineas how strong he is at the back end of a race, and he is just a remarkable animal. I can’t see why he couldn’t win [the triple crown]."

Microphone was strong at the end of the mile and James Cummings feels he may be a better chaser than leader as he did in the Hobartville, where he was third.

“With a similar ride to that he probably wins the Hobartville because he's beaten home both horses [Brandenburg and Reloaded] who beat him that day,” Cummings said.

"He's a natural chaser and likes to have something to set his mind on. He's definitely got another big performance left in him. We will just have to decide what’s next for him.”

Brandenburg pulled a shoe in the run but was game all the way to the line. "He is going to win a group 1,” jockey Rachel King told connections.

Trainer John Sargent added: “He is the sort of horse that we look at a number of races with. He got into the worst part of the track late but was very brave considering what happened.”

The slow early tempo played against Castelvecchio, which forced Kerrin McEvoy to take off at the 800m mark from last. He looked as if he would get into the race but the soft ground out wide counted against him.

“I had to go back to get some cover and we stood them a good start in a steadily run race,” McEvoy said. “Moved into it at the 700m mark and the horse finished the race off well. It just wasn’t run to suit him today. I’m sure that out in trip he can show more.”