Saqib Mahmood insisted he thrived off the responsibility of being a senior player in England’s makeshift white-ball squad after demolishing Pakistan to become player of the match in the first one-day international.

Mahmood took two wickets with the first three balls of the game at Cardiff – including the prize scalp of Babar Azam second ball – and went on to claim figures of four for 42 as Pakistan were bowled out for a paltry 141. England cantered home by nine wickets in just 21.5 overs with Dawid Malan and Zak Crawley making unbeaten half centuries.

‘I was in the front row of the team picture!’ said the Lancastrian who, with just six T20 and four ODI appearances was the third most capped player in the England side. ‘I always thrive in whatever team I play for when I’ve got that extra responsibility.

‘I knew Ben Stokes wanted me to take the new ball and he also brought me on when we needed wickets. I’m glad I was able to back that up and make the most of that responsibility.’

Mahmood, at 24, has long been considered a bowler of huge potential but has struggled for opportunities and only made this squad when the original 16 were ruled out by an outbreak of Covid that affected three players and four management staff.

‘It’s the No1 side in the world and you’ve got to do some pretty special things to take over from some of the guys who have the spots,’ he said. ‘When I’ve played for England before I haven’t managed to take the opportunity. 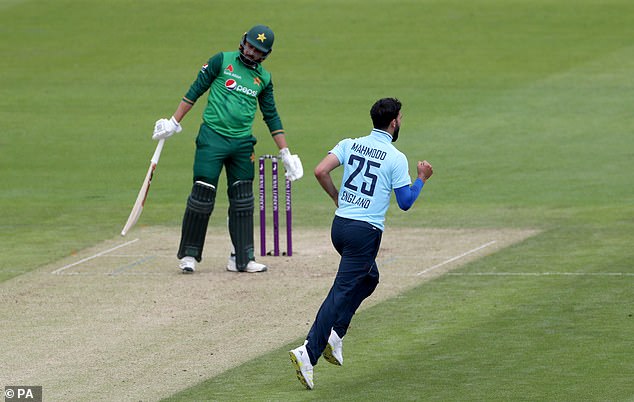 ‘It’s not a side where you’ve got time to settle and I haven’t been able to nail down a place yet. I’m just glad I took my chance today.’

England captain Stokes, who rushed to England’s rescue ahead of injury schedule to captain this side, was delighted with his first win in charge and said: ‘When you’ve got any new group together you’re always thriving for that team performance.

‘Something like today was a massive boost for us but we weren’t put under any pressure. I’ve no doubt that pressure will come at some point and what we did today will stand us in good stead when it does.’