For the first time in Test cricket’s long history, two opening batters have gone through an innings to become the last men out. After Devon Conway’s debut 200 carried New Zealand’s first innings of 378, Rory Burns responded with a third hundred of his own, providing 132 of England’s sub-par 275.

The deficit going into day five is 165: not quite big enough to put England in grave danger of losing this first Test Lord’s. In fact, Kiwi indecision with a lead that doesn’t shout total dominance gives faint hope of what would be a pretty remarkable win. Importantly, defeat seems a lot further away than it did, thanks solely to Burns.

While a full-strength England side has plenty of match-winners, they were reminded in Burns they have someone who can help ensure they do not lose. Less sexy, no doubt. But in a format like Test cricket, just as valuable.

A score of this note after being dropped for the final two Tests of the previous series in India, in front of wife and baby daughter, Cora, who was the reason he was not out in Sri Lanka at the start of the year, has plenty of nourishing qualities. From a professional perspective, the standout of a three-digit score in a scorecard that featured ducks for Dom Sibley, Dan Lawrence and debutant James Bracey, while Zak Crawley returned two and Ollie Pope 22, gives him an edge.

Ben Stokes and Jos Buttler come straight back in, and perhaps Burns, as the man out of possession, would have been on the sidelines had either been available for this fixture. In that regard, this was the ideal time to end the wait for another Test hundred. The last came in the first Ashes Test back in August 2019.

There’s a temptation to label Burns a survivor. As much as that might be an overused term, with connotations of grubbiness and making up for a lack of skill, it does stick easily to Burns.

He is the product of his environment: a wanderer in the borderlands of Championship cricket post-2012, when the stylists were picked off as the nibbly swingers and seamers began taking over.

As such, his technique has been foraged by parts he has found to help him on the way. The head tilt to give his dominant left-eye the best view of incoming danger. The bat wave loosens the hands enough to swing free but not too much to ensure contact is forceful when required. But it has also created a personality where the tougher times are endured with a view – sometimes perhaps a faint hope – that better ones lie ahead.

A lot of that has to do with gradual learning, which tallies with inserting foreign elements into his game and grooving them into instinct. Likewise with his decision over the last 48 hours to remove himself from Twitter after Ollie Robinson’s activity from a few years ago resurfaced on day one.

It was not so much the act of a man with something to hide, rather the sharp computing of a situation. Having already caused himself an inconvenience on social media when he responded to a Tweet from Alex Hartley during the third Test in India, the latest controversy was confirmation that whatever positive he garnered from it was not worth any potential, out of control negative. And given how the last 48 hours had played out, clarity was key.

The rains on Friday might have been relentless enough to wash out all of day three, but for not-out batters, every pause in the downpour was a moment to switch back on. That tax of turning a sporting mind on and off, back on and back off again is unquantifiable.

But perhaps the best example of toll came with the first delivery of day four, as Joe Root – immaculate for the 42 he had compiled two days earlier – was undone by a peach from Kyle Jamieson, which caught his outside edge through to Ross Taylor at second slip.

Burns, with 59 of his own, set about holding his ground. And while he ground out to stick around, watching deliveries past his off stump and dead-batting the odd one that threatened his stumps, he was privy to some shoddy efforts at the other end.

Ollie Pope, with 22 of the 29 runs between them, strayed across and was pinned in front by Tim Southee. Dan Lawrence, impulsive by nature, swished his wrists at a wide delivery to give Colin de Grandhomme a freebie at third slip before Bracey, a top-order batter given the lower-order brief, displayed none of the former’s robustness when he provided a gap between bat and pad that a Southee inswinger slipped to take middle and off stump without touching the sides.

It was down to Robinson to share the burden of occupation, at least for long enough to reduce the amount of time New Zealand had for the victory they were favourites for, certainly at the time of 140 for six, with their lead at 238. His 101 deliveries were as valuable as the 42 runs he scored, proving bat and ball aren’t out of place in his 27-year-old hands. A reminder of the former came with high-calibre dismissals of first innings double centurion Conway and Kane Williamson before the day was out. 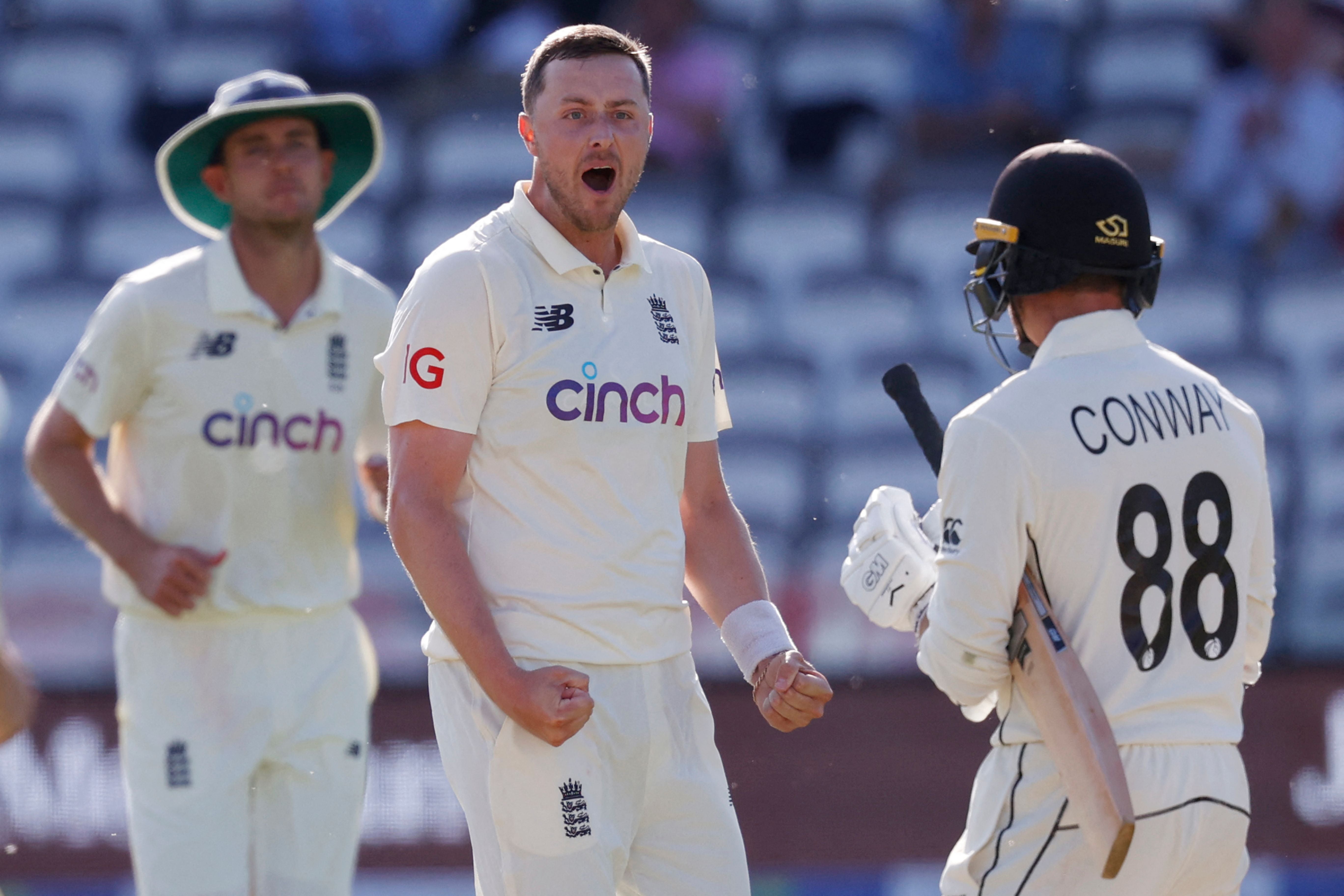 All the while, Burns was still there. Not that you could notice him. By the time England ticked over for 101 runs in the day – Robinson’s hook to Jamieson at fine leg confirming Southee’s 12th five-wicket haul before Mark Wood was caught behind for Jamieson’s eventual three for 85 – Burns had only provided 29 of them.

By then, we had entered the scrappy portion of Burns’ work. On 77, he ran past a straight delivery from Mitchell Santner that should have led to his stumping at the hands of BJ Watling. A fumble from a usually water-tight keeper felt like a unique reprieve.

There was another on 88 when he was dropped twice off the same delivery: a twitch of nerve and hands stung Southee’s palms at first slip and then Taylor’s left hand at first. Factor in a couple of blows to short balls that required timeout for concussion and helmet checks, the sense was of another knock that featured more brushes with fortune than strokes in the V (where only four of his runs were scored, from one shot).

A new problem to solve was how to make it with just one partner remaining. A typically absurd Stuart Broad innings – bowled making room to carve into the off side and losing his off stump with Burns nursing 91 – was as counter-intuitive to the situation as it was a dereliction of a vice-captain’s lot.

Nevertheless, James Anderson’s doughty resolve afforded time. A back cut, a swish to the leg side that coaxed a dive from the deep fielder that meant four once it had bounced just short, a single and then a skewed edge down to third man brought Burns a third Test hundred.

It was only then, free from the anxiety of a looming milestone, that Burns brought out the shots he had not taken out of the bag. Even one we hadn’t seen before when he moved over to the off side and slog-swept Neil Wagner over midwicket for his first six at Test level. By the time he had inside-edged through to Watling to give Southee six for 43, 100 from 267 had swelled to 132 just 30 balls later.

New Zealand’s lead was still 103, meaning the inroads England were able to make to reduce the tourists to 62 for two are not quite as sweet as they seem. But defeat is a lot further away than it looked earlier, thanks to Burns’ crafted survival instincts.