For the next couple of days the majority of Australians will be focused on one thing: finding the winner of the Melbourne Cup. But racing seemingly wants to deride its biggest asset.

Any sport would love the media attention guaranteed every year by the Melbourne Cup. It should be used as a magnet for growth rather than a contest to the bottom.

Cup week has tradition. The best of the best – jockeys, trainers, horses – have always flooded to Flemington but for the past couple of years, through a rich innovation by Racing NSW, that hasn’t happened.

The Golden Eagle has become one of the great contests of the turf in spring, but its power is being lost in competition with Derby day.

It deserves clear air to be seen as what it has become in just three years: a brilliant innovation changing the sport like The Everest.

It would be better for racing if it was placed a week later following the Melbourne Cup and better for the $7.5 million race itself.

Hugh Bowman salutes the crowd after winning Saturday’s Golden Eagle but should be it moved back a week?Credit:Getty

Sydney could have the Golden Gift as its feature race on Derby Day and get similar results as well as the net benefit of waiting a week, when it would become the centre of attention.

Let the attention be on the Melbourne Cup and Derby Day and then take the limelight for the four-year-olds who are future of the sport the following Saturday and engage the audience for longer.

The modern world moves quickly and when the horses cross the line in the race that stops the nation, attention would turn to the Golden Eagle. 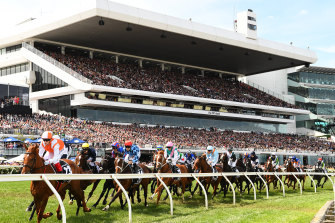 Attention from the race that stops the nation could flow on for another week into the Golden Eagle in Sydney.Credit:Getty

There will always be an intensity to the build-up to the Melbourne Cup, and the Golden Eagle would be able to piggyback off it.

There would be a flow-on effect because people want more of a good thing. Try to book a tennis court after the Australian Open or tee time at your local golf course after the US Masters and you would know the magnetic effect of top-line sport.

Remember the NRL moved a preliminary final this year so as not to compete with the AFL grand final, an act of co-operation from which the two sports benefited. 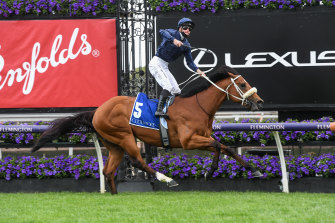 There would an enormous benefit to the public, who could focus their attention on the tradition of the Cup before turning to the innovation of the Eagle and remain engaged with the excitement of big-time racing for longer.

The Golden Eagle would give a fitting coda to the spring and get the best jockeys and trainers competing against each other in Sydney in November.

The Coolmore team completed the perfect coup as Home Affairs delivered for his stallion syndicate down the Flemington straight on Saturday.

The I Am Invincible colt has a group 1, the Coolmore Stud Stakes, on his resume and a spot next to Justify, Pierro, Fastnet Rock and Wootton Bassett at the Hunter Valley farm.

“The most satisfying day at the races I have ever had,” Coolmore boss Tom Magnier said. “A lot of people around the world put a lot of faith in us with this syndicate and to get that result is a reward for the whole team from the sales to Chris Waller and James McDonald.

“That was the dream when we started and dreams like that don’t often come true.”

Two years ago, the Coolmore team moved with stealth at the yearling sales amassing what they felt were the best colts in the country. Wise bloodstock heads like James Bester, Guy Mulcaster and Magnier worked together to purchase colts as normal but this time with one common purpose and for one team.

“We wanted to get a colt like Home Affairs that could be the future of the sport, and he showed he might be on Saturday,” Magnier said.

The Australian rotation for the Godolphin Flying Start of 2020 hit a high point as the group finally got to go to a race meeting on Golden Rose day at Rosehill on Saturday.

The students at racing’s finishing school have been on the two-year course for 14 months, but because of COVID-19 it has strictly been classroom and behind-the-scenes placements rather than the excitement of raceday.

Usually by now the Flying Start class would have been to some of the biggest meetings of the year but it was all work and no play until Saturday and the students definitely enjoyed the day.