New Zealand trainer Jamie Richards is racing towards 200 wins in his first two seasons in charge of Te Akau stables, but where he excels is group 1 racing.

It helps to have the power of New Zealand’s biggest racing brand behind him and the likes of Melody Belle, Te Akau Shark and Probabeel in the stable, but they don’t give away group 1s.

Jamie Richards on his favourite, Melody Belle, with perhaps his best, Te Akau Shark, at the beach in Melbourne during the spring. Credit:AAP

Richards has 14 group 1s in his own right to go with the 13  he won when in partnership with Stephen Autridge for a couple of seasons before taking the reins of the huge Te Akau operation.

It's a strike-rate that exceeds the best in Australia. The 30-year-old wins a group 1 for every 13 winners he trains, well in front of Chris Waller, who strikes at one for every 26 winners, while Godolphin’s James Cummings, a fellow 30-something, is one in 38 wins.

“We try to place our horses at that level at the right time, and we don’t come over here without a superior horse,” Richards said. “There is a lot of pride in the brand and the colours. David Ellis has a great record with Te Akau over more than 30 years, and we try to do it justice.”

The Shark is potentially the best horse we have, but Melody Belle will always be my favourite . . . she never lets me down.

The quietly spoken Richards has potentially the best of his best horses at Randwick on Saturday. Te Akau Shark is favourite for the Chipping Norton Stakes, and Probabeel is looking to break her group 1 duck in the Surround Stakes.

“We know only to bring right horses here, because you can quickly get shown up," Richards said. “We put have put a lot of thought and effort into doing the job properly this autumn, and hopefully we can enjoy the results in the coming months.

Patience has been the key with Te Akau Shark.

“The Shark is potentially the best horse we have, but Melody Belle [who is shooting for next month's All Star Mile] will always be my favourite, and 10 group 1s says she is the best we have. She was my first winner out on my own and never lets me down. 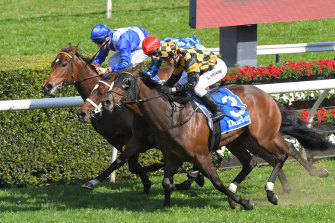 Probabeel, nearest the camera, fights out the finish of the Tea Rose Stakes with Funstar and Libertini.Credit:AAP

“However, this is really the first time, as a five-year-old, Te Akau Shark has had back-to-back preparations. He just had maturity problems at three and four, so we are finally about to see the best of him.

“He is a little bit heavier, but he is very athletic and doesn’t carry any extra condition, and that solid block of work will help.”

As Melody Belle won her Australian group 1 in the spring, romping away with the Empire Rose Stakes, there was more frustration for Te Akau Shark. He was an Epsom runner-up and placed in the Cox Plate, which alerted Australian punters to his potential despite leaving without a group 1 to his name.

The expectation on Te Akau Shark isn’t something Richards shies away from after he got his first group 1 victory before leaving New Zealand. The young trainer  has set him the Winx preparation, with the George Ryder Stakes and Queen Elizabeth Stakes to follow after Saturday.

“The next big goal for Te Akau Shark would be to get that Australian group 1,” Richards said. “If he runs up to his form in Sydney, he will be in the thick of the finish.

“Hopefully he can do that on Saturday, and certainly his work and the way he looks, he is not far off the mark.”

Probabeel was runner-up in the Flight Stakes in the spring and returns to take on a crack group of fillies in the Surround Stakes.  She won the Karaka Millions for three-year-old in January and comes to Sydney fresh. All going well, the preparation may culminate in the Australian Oaks.

“I think five weeks between runs, and a little quiet trial where she worked home nicely,  suits her,” Richards said. “Back to 1400 is ideal, she should possie up midfield with a nice run from the barrier and hopefully get a bit of luck."

Related posts:
Previous Post: ‘I’ll be more persuasive’: Bellamy to hook Cameron Smith when he can
Next Post: ‘Cyborg’ Barlow a key player as United look to upset Kings