The chair of Australian cricket’s players union, Greg Dyer, has hit out at Cricket Australia’s request to have its Test stars considered for vaccination before the tour of South Africa as part of the first rollout of the COVID-19 vaccine.

Expressing a personal view rather than that of the Australian Cricketers’ Association, Dyer said it was “morally indefensible” for sportspeople to be given priority access ahead of higher risk groups such as frontline healthcare workers and those with increased danger of exposure.

Australia’s players are slated next month to tour South Africa, which is struggling to contain a second wave of coronavirus.Credit:AP

“My personal view is that sportspeople generally should not be jumping the queue,” Dyer told the Herald and The Age.

“The sports can and have been managing the situation without vaccines and should continue to do so. It’s just the wrong look. There are more important people out there with much higher levels of exposure who need the vaccines first.”

Though CA would take only a few dozens of the 1.4 million doses for the first phase of the vaccine rollout strategy, Dyer was uncomfortable with the symbolism.

“The point to make is sports need to build protocols which don’t require vaccines and we’ve been able to, to date, and we should continue to do that until such time we’re in queue and in the appropriate spot,” Dyer said. 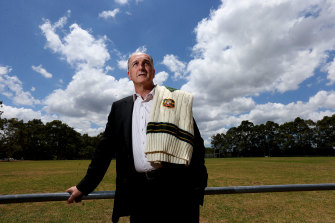 Greg Dyer is not a fan of the message cricketers ‘jumping the queue’ would send.Credit:Anthony Johnson

“It’s just wrong and will only bring all sorts of people out of the woodwork saying “what the hell’s going on here? Why are they being given this benefit?”

“It’s not morally defensible for sportspeople to jump the queue is my view and the sports have been able to manage around the position and they should continue to do so.”

CA say it has not lodged a request with the government but was having a discussion as to how their departure timeline aligned with the vaccine rollout, due to start in mid-February.

“The Australian men’s cricket team is scheduled to tour South Africa in February,” Orchard said in a CA statement.

“Accordingly, Cricket Australia has sought the advice of the Australian government to ensure the squad’s safe passage to and from South Africa.

“As part of those discussions, CA has requested clarification on whether the Government’s timeline on COVID-19 vaccinations aligns with the Australian team’s travel to South Africa.”

The Health Department said in a statement the Australian Government is currently focused on providing the vaccine for priority groups most in need of protection from COVID-19, based on the advice of the Australian Technical Advisory Group on Immunisation (ATAGI).

“The three priority groups identified by ATAGI are those at increased risk of exposure; those who have an increased risk, relative to others, of developing severe disease or outcomes from COVID 19; and those working in services critical to societal functioning,” the statement said.

“The priority population in phase 1a is quarantine and border workers, frontline healthcare workers and disability and aged care staff and residents.”

Swim star Cate Campbell this month said athletes should be given access to a COVID vaccine if it became a prerequisite to competing at the Olympics. The English Premier League has said it would not attempt to fast-track players through vaccination ahead of the public while the NBA said it would only try with the support of public health officials.

There is weariness among cricketers at the prospect of another four weeks in a bubble living under onerous restrictions plus a fortnight of hotel quarantine upon returning home but players are not publicly complaining, aware of the potential for backlash from the wider community.

All-format players such as Steve Smith and Josh Hazlewood, who last week slept in their own bed for the first time since mid-August, face several more months on the road in South Africa, the lucrative IPL in India, followed by the World Test Championship final in London – provided Australia qualifies – and a white-ball campaign in the Caribbean.