Domination after capitulation. England men, you’ve done it again. Two weeks after shooting themselves in the foot on the final day at Lord’s, all the guns were facing the right way across three-and-a-bit days at Headingley as India were blasted out of town by an innings and 76 runs. A series is squared 1-1 and fascinatingly poised.

It was all over before lunch on day four, a result in the offing just after lunch on day one when India were ransacked for 78 in their first innings. The post-match presentations were done before the players would have returned for the start of the second session.

Only 19.3 overs were needed, and it was eight from Ollie Robinson that, ultimately, torched any hope this Headingley Test might rival *that* one from 2019. Four for 25 across his morning’s work gave him five for 65 in the innings. A second five-wicket haul in just his fourth cap, and figures that now become career-best ahead of the five for 85 he notched against India in the opening Test.

Yet even this early in Robinson’s international career, it carried a familiarity. The “should I, shouldn’t I lengths”, the “will I, won’t I” lines, along with the victims he reels in. Prime cuts, too, with Cheteshwar Pujara, Virat Kohli, Rishabh Pant picked up on Saturday after starting with Rohit Sharma on Friday. Ishant Sharma was the fifth of the innings, which still counts. In this match alone, he has dismissed five of the top six.

He was aided by the brilliance of James Anderson at the other end, who only registered one wicket in the innings, but ensured there was no let-up, as per. By the time they had both finished up, the final dominoes just required a bit of gentle nudge: Moeen Ali turning one through Mohammad Shami’s gate, then Craig Overton picking up the final two wickets to finish with three for 47. In turn, Joe Root has a 27th Test match win – more than any other England captain.

The quickness of the kill revealed the overnight expectation of something special brewing to be comically optimistic. But, really, with India 139 behind, and Cheteshwar Pujara (91 not out) and Virat Kohli (45*), there was reason to believe in something extraordinary could happen. And even if it wouldn’t, there’d surely be enough cricket to enjoy the best weather of the four days so far.

Conditions dictated those feelings: best for batting with sun turned up, clouds turned down. Though the new ball was available to England, they only managed two in 80 overs on Friday. But by 12:43 pm, it was done, and those that came to the city for a good time at the cricket were left wondering if it was too late to re-route to Leeds Festival.

No run was added to the resumed score of 215 for two when Pujara padded up to Robinson – the delivery showing to be hitting the stumps upon a DRS review. That was just 21 deliveries into play, with the first run off the bat only arriving five balls later. Kohli’s first took the best part of 30 minutes to come.

The control of length – and thus, the scoring – built the kind of pressure that seemed to rise with every over. Every delivery, whether from Anderson or Robinson, turning the dial up a notch, until, suddenly, Kohli found himself in a cauldron of noise and anxiety.

Specifically within the seventh over of the day when Anderson sent down a maiden to the India captain which finished with Kohli walking back to the pavilion, caught behind. However his vice, Ajinkya Rahane, called after him, urging him to review the delivery that had come in and seamed away, but beaten him fully on the outside edge. Both umpire and Kohli had assumed a nick because of a well-timed clip of bat onto pad.

The reprieve on review allowed Kohli to clip through midwicket to take him to 51 from 120 deliveries, and a first half-century in the series. Five balls later, he was leaving the crease for good when Robinson got a real edge through to Joe Root at first slip.

That was the first of seven to go for just 41 runs, all making their own errors but, largely, succumbing to how bowling that had already made a mug of the top order and a mismatch for the lower. 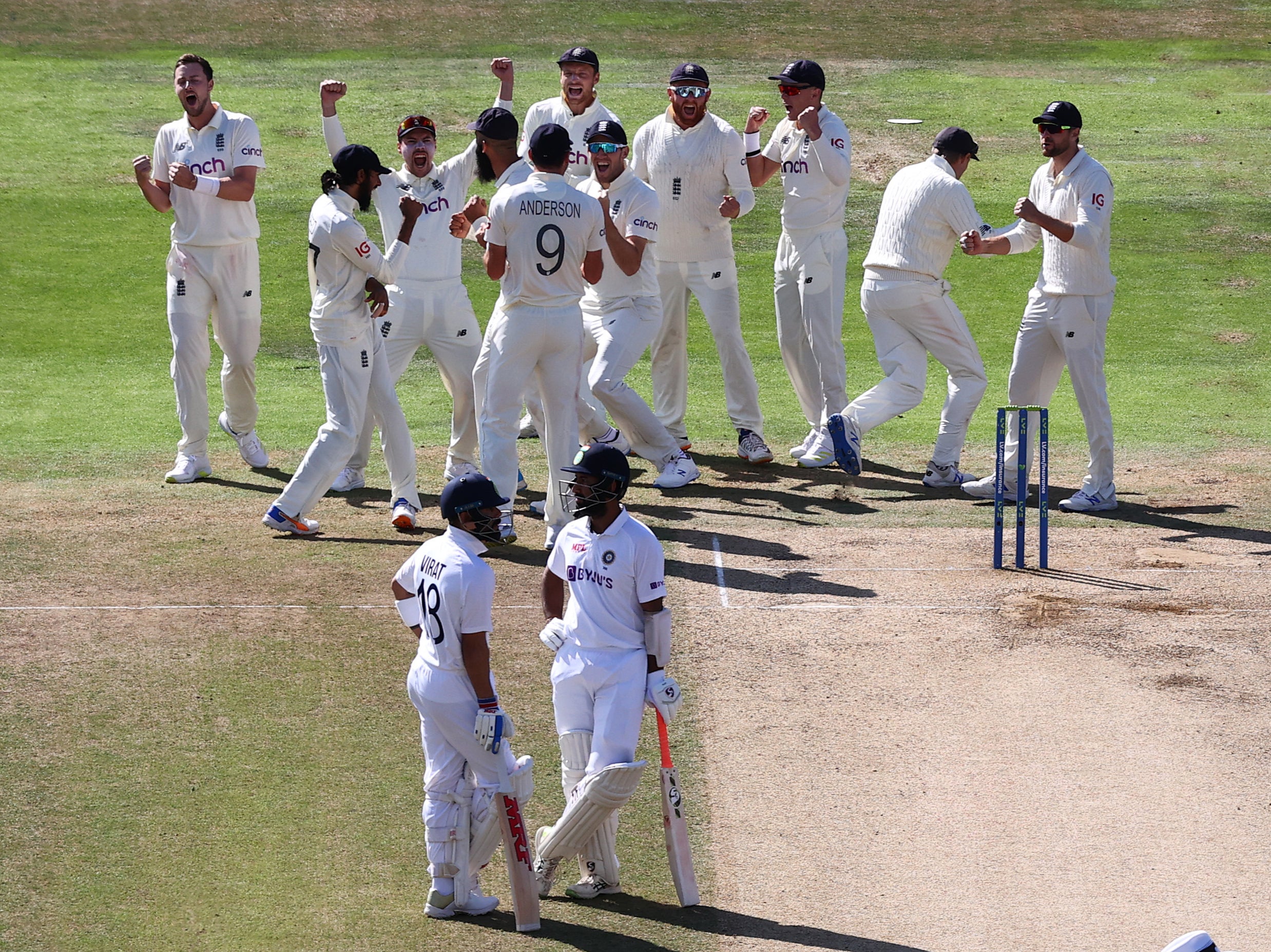 Only a breezy 30 from Ravindra Jadeja could rank as resistance, but even that had the feel of a man reaching into the glove box to retrieve an Oasis CD from his burning car. A tame end came when he feathered an edge off Overton through for Jos Buttler’s seventh catch of the match – the most he has taken in a Test – before Overton registered a career-best of his own with Mohammed Siraj caught at Jonny Bairstow at second slip to finish the match.

With most of Saturday and all of Sunday off, the workload of these final three back-to-back Test matches has been lightened, slightly. For England that will mean rest and recovery. For India, the same, though with plenty more hours to wonder why they capitulated so spectacularly in the first innings of this match.

In a way, they might regard it as an anomaly. The 78 all out may well reveal itself as an artificial boost or blow to both sides over these last few days. One expects when we reconvene at the Oval on Thursday for the fourth Test we will be reminded that England are probably not this good, and India certainly not this bad.