It would not be a stretch to say Australian cricket has a love-hate relationship with Mitchell Marsh.

The love comes from pretty everyone you speak to in the game. From teammates and opponents to coaches and backroom staff, there is not a bad word said about the man.

And the hate? It might be too strong a word, but it’s not hard to see why the player himself felt that was how the Australian public felt about him. Samples of the vitriol directed at the all-rounder can be found across social media.

But even some of Marsh’s harshest critics will have to swallow their words if the West Australian delivers the goods in the Twenty20 World Cup.

Not that Marsh will care what the punters are saying. The days when he read what the keyboard warriors wrote about him are long gone. Which is not to say it did not get him down once, telling reporters in December 2017 it made him feel “pretty shit”.

The abuse he copped came at a time when athletes and sporting organisations were less proactive in calling out trolls.

Mitch Marsh batting for Australia against England in 2020.Credit:AP

“I mean it’s pretty tough, but I thought he dealt with it as well as anyone could,” close friend and vice-captain Pat Cummins said. “It’s pretty brutal. You’ve got people that don’t know him as a person who are just purely making themselves feel good for two seconds that they do a social media post by putting someone else down.”

As much as there is no justification for such behaviour, Marsh could see where his detractors were coming from – even if the boo brigade lacked the empathy to consider things from the player’s perspective.

“Most of Australia hate me,” Marsh said during the fifth Ashes Test of 2019 after claiming a five-wicket haul. “Australians are passionate, they love their cricket, they want people to do well.

“There’s no doubt that I’ve had a lot of opportunity at Test level and I haven’t quite nailed it, but hopefully they can respect me for the fact I keep coming back, I love playing for Australia, I love wearing the baggy green cap. I keep trying; hopefully I win them over one day.”

Those in the game have always been on Marsh’s side, even if he tested the patience of some as a youngster who liked a good time. They love his team-first attitude, selflessness and team spirit.

On the 2019 Ashes tour, Marsh organised a coffee club where players and team staff would go on early morning walks to shoot the breeze. “Win the morning, win the day” became somewhat of his motto. He features numerous times in the Amazon’s fly on the wall documentary on the team as a DJ, air guitarist, drummer – anything for a laugh. “I get a buzz out of making people happy,” Marsh said on The Test.

Though he played only three games in the 2015 World Cup, then coach Darren Lehmann credits Marsh and fellow squad members George Bailey, Xavier Doherty and Cummins as being key contributors to the team’s triumph.

“They’d go to the shops the night before games, make their cheese platters on the boundary line while they’re watching the World Cup – that was Mitch and George being funny and having a great time,” Lehmann, who is raising money for the Heart Foundation’s MyMarathon, recalls.

“The night before the World Cup final they went to a karaoke bar, knowing they weren’t going to play, and had a few drinks and a bit of fun. They’re always up for a bit of a laugh. That was one of the reasons we had so much success in the World Cup because of our benchies.

“I can’t say it enough – exceptional human beings who made everyone gel together, organised the social functions and let the blokes just end up playing.“

Marsh’s contribution to Australian sides is more than the sum of runs and wickets, which might explain why several selection panels kept picking him when others with his output may have been shelved.

Potential is a dirty word, but Marsh had it in spades. Few players with Marsh’s strokeplay and power can also nudge the 140 km/h mark (in his youth) with the ball. 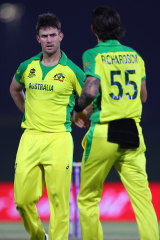 Marsh in action against India in a warm-up game for the T20 World Cup.Credit:Getty

By anyone’s reckoning, Marsh’s Test numbers are not flash – an average of 25 with the bat and 39 with the ball from 32 games – but he played at a time when selectors needed an extra bowling option in the top six to protect Mitchell Starc and Josh Hazlewood at an age when they were more prone to injury.

“We saw a really high-quality person, and a high-quality player, so you were hoping he’d be the one to take on the Shane Watson role in the top six and really develop,” Lehmann says. “He didn’t fail us at all. I was really happy with his progression.”

Close to giving the game away in 2018 after the death of a close friend, the recently engaged Marsh is now happy and settled off the field. The past 18 months have been as good as any in his career. His performances in the Caribbean and Bangladesh booked him a ticket to the T20 World Cup and earned him the No.3 slot formerly belonging to Steve Smith no less.

Asked who he felt could make a difference for Australia in the tournament, Glenn Maxwell volunteered Marsh, whose power hitting has left teammates in awe, and coaches fearing for their safety.

“We felt we were putting our lives in our own hands every time we threw balls at him, it was scary how hard they were coming back to us at times,” WA coach Adam Voges says.

Marsh, who turned 30 this week, was once picked for what he could do in the years to come, but his time is now.

“That’s right, he’s got to perform,” Lehmann says. “The Marsh family have a great pedigree but more importantly their family is exceptional – the whole family. The whole Marsh family should be exceptionally proud of what they’ve achieved, but there’s still a lot left for Mitch to achieve.”