Michael Vaughan has been stood down from BBC’s 5 live’s Tuffers and Vaughan Show after being accused of making a racially insensitive remark to Azeem Rafiq.

Vaughan admitted on Thursday that he had been named in the Rafiq report — but firmly denied the claims that he told a group of Yorkshire players with Asian heritage that there were ‘too many of you lot, we need to do something about it’.

Despite his denial, the BBC have made the decision to remove the Ashes-winning captain from Tuffers and Vaughan Show as they ‘take any allegations of racism extremely seriously.’

The BBC released as statement saying: ‘The BBC takes any allegations of racism extremely seriously.

‘The allegation against Michael Vaughan pre-dates his time working for the BBC, we were not part of the investigation conducted by Yorkshire County Cricket Club and we have had no access to the subsequent report.

‘However, we were made aware of a single allegation which Michael strongly denies and we have been monitoring the situation closely.

‘We have made the editorial decision that Michael won’t appear as a presenter on 5 live’s Tuffers and Vaughan Show on Monday. 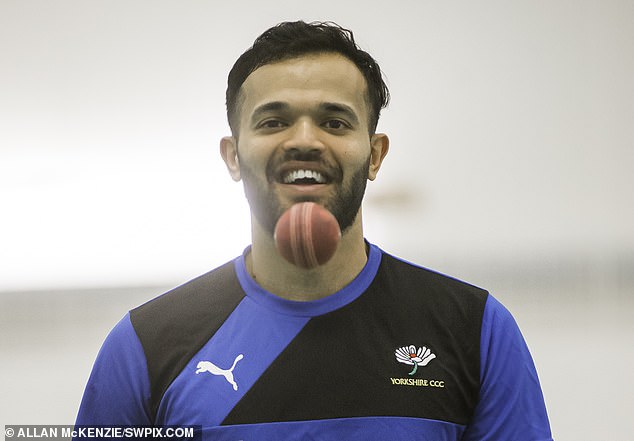 Which companies have already severed ties with Yorkshire over the toxic racism row?

‘The show focuses on topical matters and given his personal involvement, we need to ensure we maintain the impartiality of the programme. We train in discussion with Micheal and his team.’

Vaughan has denied the claims he made a racist remark ahead of a County Championship game in 2009. Writing in his Telegraph column he said: ‘In December 2020 I was asked to speak to the independent panel formed by Yorkshire to investigate Rafiq’s claims.

‘The night before I was due to give evidence, out of the blue, I was hit with the news that Rafiq was alleging that in 2009 before a Yorkshire match against Nottinghamshire, I had said to Rafiq and two other Asian players as we walked on to the field together that there are “too many of you lot, we need to do something about it”.

‘This hit me very hard. It was like being struck over the head with a brick. I have been involved in cricket for 30 years and never once been accused of any remotely similar incident or disciplinary offence as a player or commentator.

‘I completely and categorically deny that I ever said those words.’

However, Rana Naved-ul-Hasan says he is willing to give evidence that Vaughan did make the racist remark – claiming he was next to Rafiq at Trent Bridge in 2009 when the incident allegedly took place, according to ESPNcricinfo. 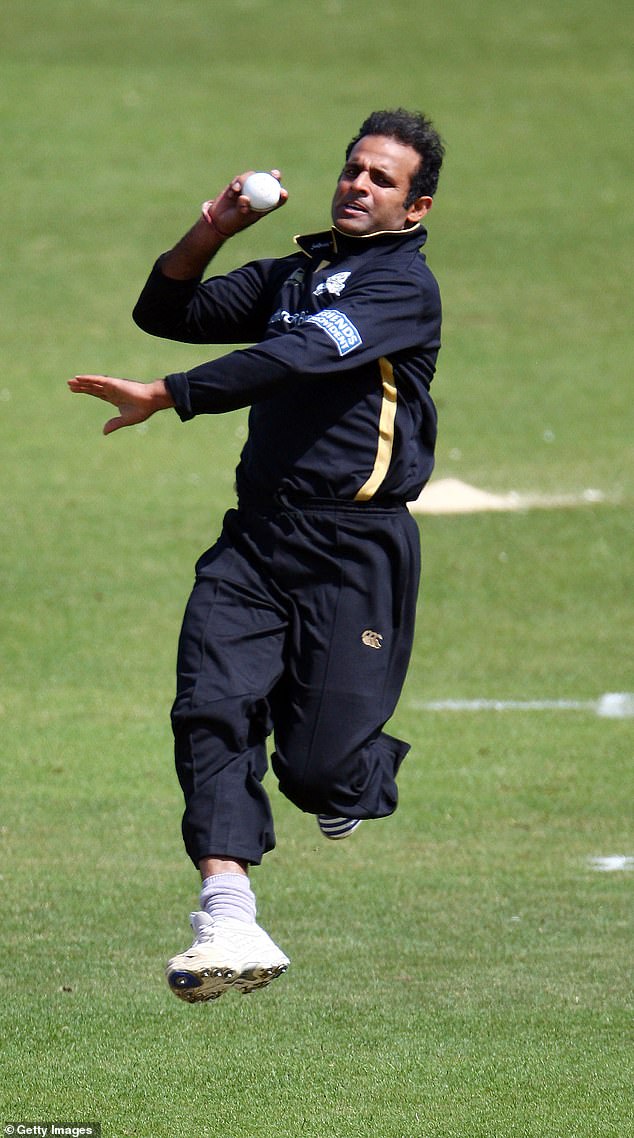 Rana Naved-ul-Hasan (pictueed) says he is willing to give evidence that Mr Vaughan said ‘there’s too many of you lot’, claiming he was next to Mr Rafiq at Trent Bridge in 2009 when Vaughan is alleged to have said it, according to ESPNcricinfo .

Vaughan –  who played for Yorkshire his entire career from 1993 to 2009, before moving into an advisory role at the club after retiring – has also denied a second claim in the report, that in his post-playing days he had advised Yorkshire chiefs in front of Rafiq that they should sign New Zealand batsman Kane Williamson due to his ability to bowl off-spin.

Rafiq claimed in the report that this was racism, intended as a direct threat to his own place in the team as a frontline spinner, with Williamson only a very occasional bowler.

‘It is because of my race, colour, ethnic origin, that Michael Vaughan made the comments that he did,’ said Rafiq.

Vaughan responded on Thursday night: ‘I would never have said that in front of a group. I saw the way Williamson played in Twenty20 cricket and recognised that we needed three-dimensional cricketers in our top four who could score runs, bowl overs and field well.

‘Never have I discriminated against anyone or judged a player based on race. All I ask and all I have ever asked is, ‘how can we improve as a team?’

‘By suggesting Yorkshire sign Williamson I was attempting to improve the team and my cricket knowledge suggests that was the right call.’

September 2020: Yorkshire launch investigation as Rafiq reveals that ‘deep-rooted’ racism at the club left him ‘close to committing suicide’. ‘I would regularly come home from training and cry all day,’ he said. Accusations included people saying there was ‘too many of you lot’ referring to Rafiq and Asian team-mates.

December 2020: Rafiq files legal claim against the county, claiming he suffered ‘direct discrimination and harassment on the grounds of race, as well as victimisation and detriment as a result of his efforts to address racism at the club’.

June 2021: Report is delayed and Rafiq’s lawyer says the pushbacks ‘create a lack of faith in the entire process’. Employment tribunal is held but parties fail to resolve the dispute.

August 2021: Yorkshire issue ‘profound apologies’ to Rafiq as report finds he was ‘the victim of inappropriate behaviour’. But they do not accept the claim of institutional racism – Rafiq accuses the county of ‘fudging’ his claims and promised he was ‘not going away’.

September 2021: ECB are ‘very concerned’ with the summary of the panel’s findings, with Yorkshire admitting Rafiq was the victim of ‘racial harassment and bullying’.

But just seven of the 43 allegations made are upheld, with Yorkshire saying they do not intend to publish a full report.

October 2021: Yorkshire say they will not take disciplinary action against any of its employees following the report. Rafiq writes on Twitter that the club is ’embarrassing’, saying it gives a ‘green light’ to racism.

This week: Details of the report are published by ESPNcricinfo, including a senior player’s admission that he repeatedly used the word ‘P***’ in reference to Rafiq, which was deemed ‘banter’. Health secretary Sajid Javid said ‘heads should roll’, with the Prime Minister asking the ECB to investigate.

What’s next?: Rafiq, Yorkshire now ex-chairman Roger Hutton and director of cricket Martyn Moxon will give evidence to the DCMS committee on November 16. ‘Time for the full truth,’ said Rafiq on Tuesday.

Yorkshire are facing commercial pressure with sponsors ending association, while legal claims are still not resolved.