Little Brown Bear blows away field in the Group One Keeneland Stakes by rocketing to a seven-length win and is now favourite for next season’s 2,000 Guineas

Little Big Bear catapulted to 5-1 favouritism for next season’s 2,000 Guineas after blowing away a quality field with an explosive performance in the Group One Keeneland Stakes at the Curragh.

Jockey Ryan Moore did not have to ask for anything like maximum effort as the 13-8 shot, trained by Aidan O’Brien, rocketed to a seven-length win.

The race had been billed as the hottest showdown of two-year-olds so far this season. 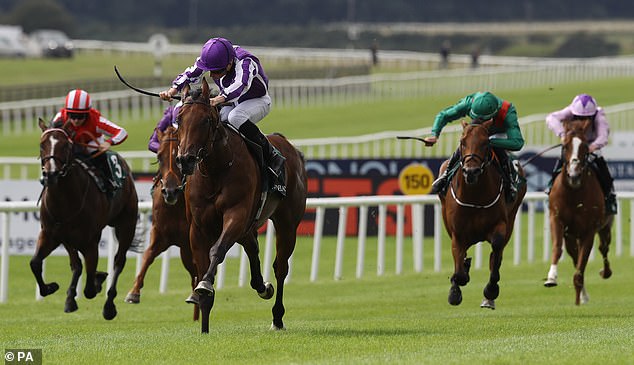 Runner-up was Persian Force, winner of Newmarket’s July Stake, third was Shartash, who had landed the Railway Stakes at the Curragh, and fourth was Bradsell, who had been the subject of glowing training reports in the aftermath of his impressive Coventry Stakes win at Royal Ascot.

Moore said: ‘He couldn’t have been more impressive. The horses which came here looked like they had good form in the book and it looked a strong race, but he was at a different level.

‘He is a very exciting horse. There is every chance he will be a Guineas horse next year but we will get this season out of the way first. He is doing it all on pure ability — I don’t have to do anything on him.’

Little Big Bear was beaten by a short head on his debut but has won his subsequent four races, displaying his pace to win the five-furlong Windsor Castle Stakes at Royal Ascot. 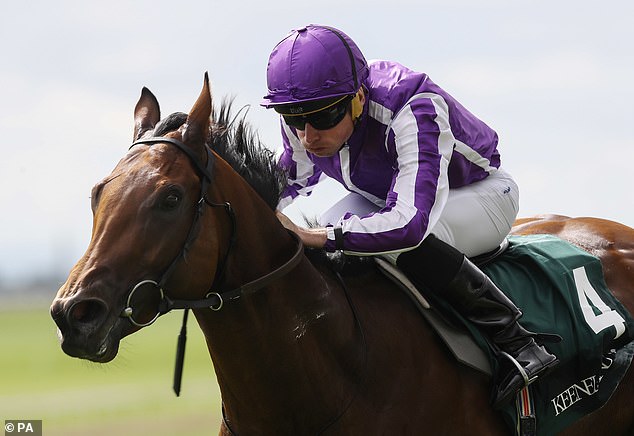 The horse, ridden by Ryan Moore  is now the favourite for next season’s 2000’s Guineas race

Saturday’s race was over six furlongs and a further step up in trip is an option now for the Group One National Stakes back at the Curragh next month.

On both pedigree and running style the mile of the 2,000 Guineas should be well within the scope of Little Big Bear. O’Brien, who was winning the Phoenix Stakes for the 18th time, revealed the colt had overcome a pre-race scare before being allowed to run after he kicked a wall, requiring a shoe to be replaced.

The trainer added: ‘Ryan said when he let him go it was all over. He has been progressing from every run.’

The Hollie Doyle-ridden Bradsell did have a potential excuse for his run and fourth-place finish as he stumbled when leaving the starting stalls.